Golden History Museums’ list of top ten artifact donations is becoming a year-end tradition—partly due to positive feedback, but also because the list illustrates our mission so well, which is to collect, document, and share Golden’s colorful history. For the third year in a row, here are my ten favorites out of over 50 new donations. 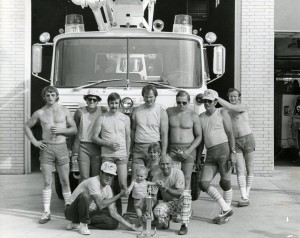 8. Golden High School graduation dress worn by Lorraine (Giesling) Wagenbach in 1936. The full-length satin dress includes a matching jacket. At their 50-year class reunion everyone in attendance was asked to answer the question, “What have you learned in 50 years?” Lorraine responded, “Tough times often bring blessings, too.”

7. A bowling ball, three pins, and a size 6 pair of shoes from the Golden Bowl, plus photographs and other memorabilia from long-time owners Don and Maxine Jensen who also shared stories about a made for TV movie filmed at the bowling alley titled, “Escape From Terror: The Teresa Stamper Story” —real life crime drama in Golden. 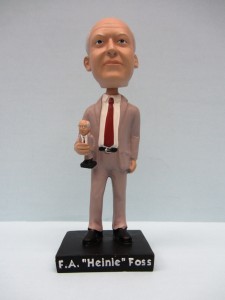 The bobblehead version of Heinie Foss is a pretty good likeness.

6. Bobblehead doll of Fredrick Allen “Heinie” Foss made to celebrate the 100th Anniversary of the Foss Drug store in Golden (1913-2013). Each doll is individually numbered; the museum owns number 1 out of 100 made.

5. Student John Bernstein’s field book for a Colorado School of Mines summer surveying course held in the summer of 1940. A table of contents includes 31 problems that cover everything from differential leveling to determining an inaccessible distance using a transit—things any self-respecting engineer needs to know.

4. Gift certificate from Sam’s Land Goosetown Tavern, good for one Gut Bomb Supreme! It’s even signed by owner Sam Wayland and includes a caricature of a customer seated at the bar indulging himself. 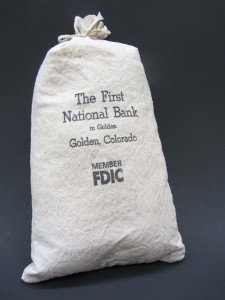 I wonder how many $100 bills it would take to fill this bag?

3. Money bag from the First National Bank in Golden. It was purchased from an antique  dealer in Carbondale, Colorado, who said it had been “laundered.” The bank originally opened in 1937 at 1201 Washington Avenue before moving to the corner of 13th and Jackson Streets; it’s now a Wells Fargo branch.

2. Itemized receipt for the late Harvey L. Corbin’s funeral at the Woods and Sanders Funeral Home in Golden. His funeral in 1920 cost $178.40. The black broadcloth casket cost $100, while his black business suit and embalming each cost $15.

1. Huge manuscript map of Jefferson County from about 1890. Overall dimensions are roughly 14 feet long by 5 feet wide. Donation paperwork was only recently completed and this map clearly warrants more research.

I’m always assessing potential museum donations. You may reach me at mdodge@www.goldenhistory.org or 303-277-8714.