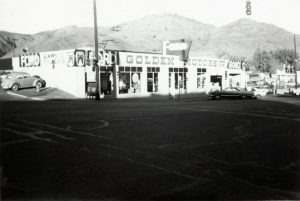 Golden Motors at the corner of Washington Avenue and 11th Street, c. 1960s. This longtime garage and Ford dealership was torn down to make way for the Golden Hotel.

An unexpected collection of photographs lands at Golden History Museums

A Golden resident and local antique dealer donated 65 old Golden photographs and postcards to the museum last week. Arlene Munyon acquired the collection intending to resell them. Upon realizing the historical value of the images, Arlene called me to see if the museum might be interested. I surveyed the collection and immediately knew they were a great fit. I offered to purchase the collection, but Arlene insisted on donating them all. How cool is that? 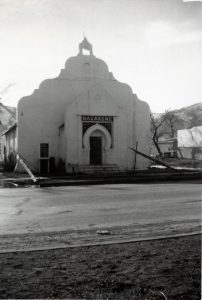 Established in the 1920s, the Nazarene stood north of Clear Creek where the Golden Visitor’s Center stands today.

The collection provides a visual record of many once-prominent Golden buildings which were demolished in the 1950s and 1960s. Photographs capture businesses like Duvall-Davison Lumber Co. and Golden Motors. Old homes that belonged to the Koenig,  Bell,  and Kellenbenz families are present too. The collection also includes photographs documenting six different Golden churches. Basically documentary in nature, I believe a number of shots were taken prior to impending demolition by onetime local historian Irene Goetze.

While all of the images are stellar, a few really stand out.  One is a group portrait of the local Red Cross Chapter sewing club. It’s in excellent condition and many of the women are identified by last names on the back (a rarity when dealing with historic photographs). Equally important is an interior of the Colorado Transcript offices below, dated 1929. 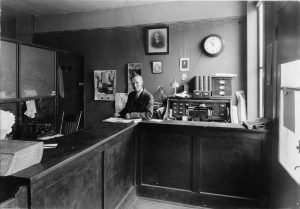 Interior view of the Colorado Transcript office when located at 1115 Washington Avenue. The man in the center is James Cuyler Miller, onetime editor who would go on to found the Jefferson County Republican.

You never know what treasures may come in the door on any given day. It’s exciting and always a pleasant surprise. It also feels good to work with community members who are passionate about their history. Thank you, Arlene!

If you have a treasured photograph or object that illustrates Golden’s history please give me a call at 303-277-8714.

This article also appeared in the Golden Informer.