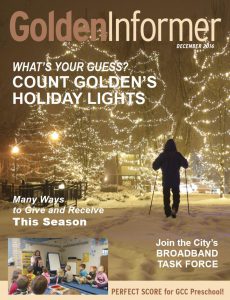 Managing thousands of items in the City of Golden’s museum collection can be a daunting task, so it’s gratifying to look back over the year and celebrate a few of the bigger accomplishments. Some highlights include:

And that’s not all—over 70 new donations were processed. Below are ten of my favorites.

8 and 9. Castle Rock Mountain Railway & Park brochure and real photo postcard of a jovial railway conductor with visitors, c. 1913, purchased by museum. While a very short-lived tourist enterprise, it still captures the imagination. The brochure refers to Castle Rock as “The Sentinel of the Rockies” and also “a paradise of camera enthusiasts.”

Do you have anything to add?

If you have a piece of Golden history you’d like to offer the museum please contact me at mdodge@goldenhistory.org.

The preceding article appeared in the December 2016 issue of the Golden Informer.