A history lesson on the museum

Home » Collections and Exhibits » A history lesson on the museum

Everything has a history-museums included

This year marks the 80th anniversary of the museum’s official opening in 1939. The Golden History Museum has a complicated history with various fits and starts, and honestly, we don’t have it all nailed down, yet. I summarized this history from an old museum business plan dating from August 1999. 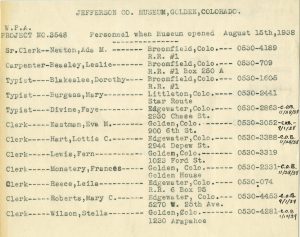 This archival document from the collection records the 12 people employed when the museum was founded in 1938.

The origin of the Golden History Museum dates back to a Works Progress Administration (WPA) project in August 1938. Prominent pioneers and ladies’ groups organized a museum committee with the help of the Jefferson County American Red Cross chapter, the local PTA and the American Legion to collect items for a new museum. The museum was originally housed in what was the North School in Golden. After the WPA disbanded in 1941, the museum ceased to operate, and artifacts not reclaimed by owners were boxed and stored in the basement of the old Jefferson County Courthouse. They remained there until 1953 when the Mount Lookout Chapter of the National Society Daughters of American Revolution (NSDAR) adopted the museum, and persuaded Jefferson County to reopen the museum with the Chapter as managers. Jefferson County agreed to house the museum in the recently vacated courthouse and allowed funding for heat, light and some building redecorating. With the help of a local Boy Scout troop, students from the State Industrial School and donations from the local Kiwanis Club, the museum officially opened its doors on February 22, 1954. 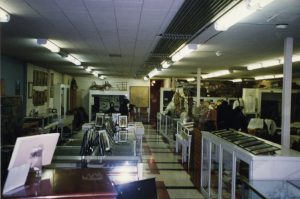 Inside the Golden History Museum when it resided at Golden City Hall, c. 1980s. Things sure have changed.

In 1958, Jefferson County decided to abandon the old courthouse (because a new one was built) and offered the museum, its collection and current funds to the City of Golden. Golden citizens voted overwhelmingly to build the west wing of the newly planned municipal center specifically for the museum. The City agreed to accept the museum and the Mount Lookout Chapter of the National Society Daughters of American Revolution pledged their on-going management with some financial support from the city. The new Civic Center for Golden was dedicated on May 6, 1961.

In addition to the museum, the center also contained a fire station, police station, city offices, chamber of commerce office, and the Golden branch of the Jefferson County Library. Interestingly, this idea is coming full circle with recent news that the CIty of Golden will purchase the MillerCoors North Office Buidling at 311 10th Street to create a grand new municipal center—a center that will once again include the history museum, and yet-to-be-determined Golden cultural organizations. History does repeat itself.

In October 1996, the museum moved out of Golden City Hall to the recently vacated Golden Library building at 923 10th Street (our current location). The City spent about $100,000 on renovations, greatly expanding the existing floor space to make room for more displays and better storage.

That is all for now. I hope to share more contemporary museum history later this year. One last fun fact: The museum launched the first membership drive in 1998, successfully raising about $6K. Not bad.