All the World’s a Stage with the Golden Thespians

With good reason, Golden was abuzz when the announcement came that Miners Alley Playhouse would purchase the old Meyer Hardware building. This exciting opportunity will allow the playhouse to grow and evolve with the rest of downtown Golden, their home since 2003.

Golden’s love for the performing arts dates back to 1859, when Mademoiselle Haydee and her sisters performed musical selections at a local boarding house known as the Jefferson House.  This first documented theatrical event set the stage for many more. Our first performing arts center of sorts was the Golden Opera House. Built in 1879, it provided entertainment such as theater, dances, music and other large gatherings. 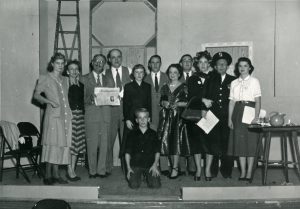 Cast photo for the play Rehearsal for Death, which premiered on Dec. 4-5, 1952, at Guggenheim Hall, the 23rd season of performances by the Golden Thespians. The three-act play starred veteran Golden Thespian members Mildred Kidd, Tom Paynter, and Ivan Hebel.

Founded in 1929 (or 1931), the Golden Thespians entertained Goldenites for decades. On average they produced two plays per year, performed in Guggenheim Hall on the Colorado School of Mines campus, and later in Golden City Hall. In 1971, they took over the old site of St. Joseph’s Catholic Church on East Street and renovated it into a performance space, fittingly named the Cathedral Playhouse. Their first performance here was a comedy titled, “Send Me No Flowers.” An active community group, they were even referred to, in the 1970s, as Colorado’s oldest continuing amateur theatrical group.

A scrapbook from the Golden Thespians was recently “rediscovered” during the ongoing Legacy Inventory Project. It covers the years 1942 through 1961, and preserves many playbills, tickets, photographs, and reviews from those plays.

There’s always more to research. The museum would love to talk with members of the Thespians if anyone is out there. If you have stories or memories to share, please reach out to Mark Dodge at mdodge@goldenhistory.org.