An historic house on Armistice Day 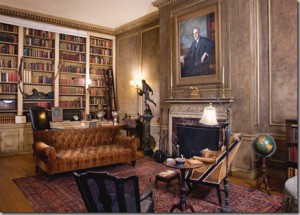 Since tomorrow is Veterans’ Day–or Armistice Day, as it used to be known–I was reminded about a cool little museum in Washington DC that I think is worth a visit. Woodrow Wilson, our nation’s 28th President, is little regarded today, but was leader of the United States during one of the most transformative eras in our history. Wilson was from a well-heeled Virginia family and began his career in academics (history nerds like myself enjoy pointing out that he had a PhD in history). After serving as President of Princeton University and then Governor of New Jersey, he was narrowly elected President in 1912–essentially because Teddy Roosevelt played a Perot-like spoiler role in the election, causing a fraction in the Republican vote. After one bumpy term, Wilson was again narrowly elected in 1916 and, after promising to keep the US out of WWI, plunged the country headlong into Total War.

Wilson was deeply involved with negotiating the Armistice Accord that ended WWI on “the eleventh hour of the eleventh day of the eleventh month.” His signature element of the Peace was the formation of a League of Nations–forerunner to the United Nations–and an element that was never ratified by Congress. While on tour promoting his peace plan, Wilson suffered a major stroke in Pueblo, Colorado. At the end of his term, Wilson left the White House deeply unpopular. He retired to a beautiful house in DC’s Kalorama district where he died in 1924.

One of the reasons why I love visiting historic houses–especially those inhabited by great leaders like Wilson–is to catch just a glimpse of their humanity. Wilson’s house, while quite opulent for its day, seems pretty modest by many of today’s measures. Possibly my favorite room is his library and office where he wrote, reflected and even broadcasted speeches. Another great space is the parlor on the second floor filled with personal items given to him by world leaders.

Wilson profoundly changed the United States and oversaw the country during its transformation from emerging power to world leader. The Woodrow Wilson House is definitely worth the visit.