Over a year ago, the curatorial department quietly started a part-time pilot project to completely inventory the Legacy Collection at the museum. We define the Legacy Collection as everything existing in the collection when the City commenced museum management in July 2010. Long overdue, we deferred this inventory to address other priorities like an exhibits program and multiple building improvements. Finally, the time has come to get the entire collection in order, and so far, this detailed work is paying off. 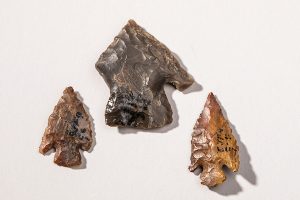 For over 15 years, much of the Legacy Collection has been stored on the fourth floor of a privately owned office building at Denver West in Lakewood. Currently, we’re benefiting from close to 3,000 square feet of donated space. We’ve literally placed our hands on thousands of artifacts, a process that’s turning up a number of forgotten gems not documented in the database. It’s no surprise, but we’re also finding thousands of artifacts that fall well outside of our mission that’ll be removed through a formal deaccession procedure.

A few noteworthy artifacts rediscovered to date include:

• Two partial reports from the Second (1862) and Seventh Sessions (1867) of the Legislative Assembly of Colorado Territory. The Seventh Session met briefly in Golden in December, 1867, the last year Golden was Capital.
• A collection of early 20th century eyeglasses, eyeglass cases, and a display cabinet that belonged to Golden optometrist E. A. Bader, who practiced from about 1949-1970.
• Stone tools and other archaeological remains excavated from the small Hall-Woodland Cave site west of Golden. Discovered in 1964 this Paleoindian rock shelter was intermittently occupied from 500-900 C.E.
• A sword that belonged to Golden Civil War veteran, Lt. John T. Larkin of the 57th Illinois Volunteers.

We even identified some property that’s not even ours! A 17-year-old loan of a dozen artifacts from the Estes Park Museum were returned earlier this year. And we’re not done yet. This is a multiyear project, so stay tuned for more updates.

Once inventoried, artifact records are added to the online collection. And In May we’ll host a rare behind-the-scenes tour of collection storage, but space is limited so register soon! 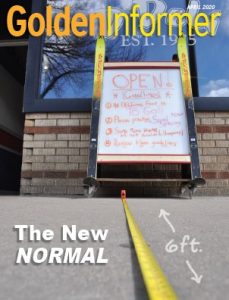 This article also appeared in the April 2020 issue of the Golden Informer.