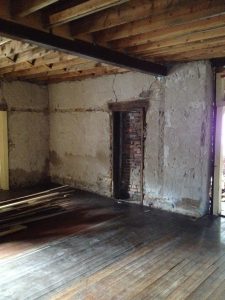 Hidden door to exterior exposed on northwest corner of parlor.

When it was first discovered, the silicate minerals known as asbestos were prized for builders for numerous reasons—it was strong, absorbed sound, and was naturally fire resistant. That was incredibly important in the 19th century when the majority of buildings in American cities were constructed mainly of wood. But, by the mid-20th century, it became widely understood that inhaling the fibrous material was carcinogenic and potentially lethal. By the 1970s, asbestos nearly disappeared from construction materials and heavy restrictions on the use and removal of the material were imposed.

A recent examination revealed that asbestos was present in vast areas of Astor House including the wall’s plaster coatings and even the wallpaper. After weighing the options for minimal abatement and encapsulation, it was determined that it would be less costly and better for the future use of the building to have asbestos abated from the entirety of the building.

Because removal is so highly regulated, abatement requires a number of things including protective clothing, breathing apparatus, and showers for workers, air filtration systems, and specialty removal and disposal for contaminated materials.

Abatement is also highly invasive as the entirely of the asbestos-laden plaster and even lath and coverings must be necessarily disposed of. This week, abatement wrapped up at Astor House. What was left behind was an exquisite skeleton of the building’s interior. The process answered some questions, but mostly raised new ones about how the building has been configured and reconfigured over the past century and half. Take a look at some of these beautiful and haunting images of Astor House post-abatement. 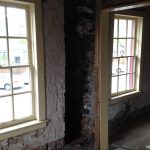 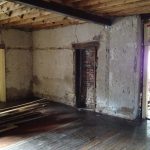 Hidden door to exterior exposed on northwest corner of parlor. 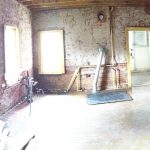 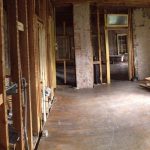 View from kitchen toward parlor 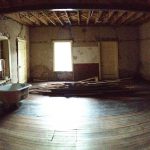 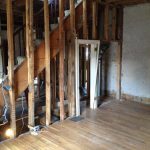 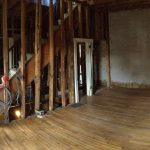 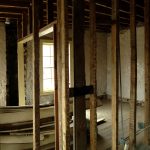 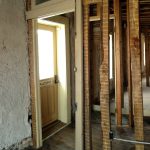