Blacksmiths Banked the Bucks in Golden

The following article originally appeared in the June 2015 issue of The Golden Informer.
Blacksmithing played a crucial role in the early development of Golden and the West. As with much of the Mountain West, most of the initial settlement and development revolved around the exploration for and extraction of mineral resources; the technology of the time required that the tools be made and refurbished by skilled toolmakers. 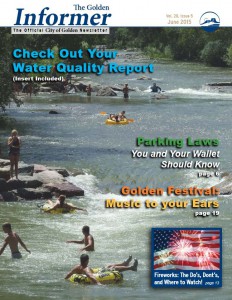 At the time, there were tens of thousands of smiths across the country willing to travel to where the work was. In some ways, this posed more of a challenge than a benefit, since sometimes the men would hardly have finished their training as smiths before running off looking for adventure and treasure. Blacksmiths in America tended to set up shop at their earliest possible moment, with master blacksmiths often being called masters because they could afford to set up a shop, rather than because they had mastered the craft.

These men (and they were almost universally men) could be guaranteed plenty of work, year round. Should one mining camp play out, the smiths could move on to another, packing their tools and following the ore. Or, if they didn’t want to travel and were skilled with the tools for working bigger plates and sheets of iron and steel, they could work for the railroads. This was work that would be somewhat more predictable, as well as more stable, since the railroads showed much greater staying power than the mines. Additionally, smiths who didn’t relish hauling their kits up the mountains could set up shop in Golden proper and be assured of making a good living. 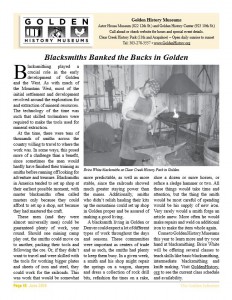 A blacksmith living in Golden or Denver could expect a lot of different types of work throughout the days and seasons. These communities were important as centers of trade and as such, the smiths had plenty to keep them busy. In a given week, a smith and his shop might repair the springs on a wagon, sharpen and dress a collection of rock drill bits, refashion the tines on a rake, shoe a dozen or more horses, or reface a sledge hammer or two. All these things would take time and attention, but the thing the smith would be most careful of spending would be his supply of new iron. Very rarely would a smith forge an article anew. More often he would make repairs and weld on additional iron to make the item whole again.

Come to Golden History Museums this year to learn more and try your hand at blacksmithing. Brice White will be offering several classes to teach skills like basic blacksmithing, intermediate blacksmithing and knife making. Visit our events page for the current class schedule and availability.