In case you’re out of the loop, it’s football season. I made it to my first Broncos game last Sunday and watched the Bears outplay and defeat the the home team in the last second of the game. While at the stadium I popped into the Colorado Sports Hall of Fame to explore and get a look at 2019 inductees, which include Golden resident Marv Kay (inducted in April of 2019). 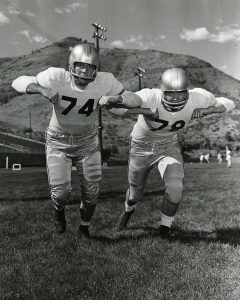 Marv is a Colorado School of Mines (CSM) graduate like his father, a free agent for the Denver Broncos, CSM Foothall coach, then CSM Athletic Director. Outside of Mines he served on Golden City Council and finally as Golden Mayor. In 2015 the CSM Orediggers started playing in a new football stadium named Marv Kay Stadium. Here’s a link to his profile.

Whether a sports fan or not, I recommend a visit.

In July 1960 the Broncos opened their first training camp in Golden at the Colorado School of Mines.

A few other Bronco connections: