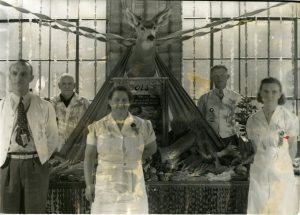 Coors employees pose around a centerpiece for the annual holiday party, about 1939. The guy in the back left is Orf Hall, longtime Coors night watchman.

Parties and food just go together, and Adolph Coors Jr.’s annual holiday parties were the best. Throughout the 1930s Golden and the nation were in the grip of a severe economic depression and Prohibition to boot! Times were tough, so the Buckskin Party was a much needed excuse to celebrate.

Sponsored by Adolph Coors Jr. and the Adolph Coors Company, the first Buckskin Party was held in 1932. This annual party became a tradition and continued through 1940. Invitations were extended to all of Adolph Coors Jr.’s employees, their families, and other special guests. These were huge parties with well over 1,000 guests in attendance, or nearly half of Golden’s population. 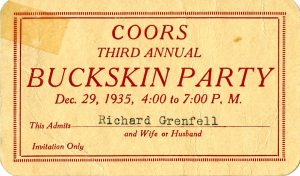 1935 for Richard Grenfell and a guest

The menu usually included elk and venison harvested by Coors men and others on hunting trips earlier in the fall (hence the name). They froze the meat and stored it until the main event.

Longtime Golden resident and Coors family domestic employee, Alma Waters Brushwiller, remembered, “Employees who had bagged deer during the hunting season provided venison, which was barbecued and served with rye bread, ham, Swiss and Limburger cheese, liver sausage, onions and pickles and, of course, Coors beer.” Water Brushwiller went on to note, “The first Buckskin party became an honored Christmas tradition, and in time the guests numbered over 1,400. Local housewives prepared the sumptuous feast for the guests, and Mr. Coors was always the genial host.”

In 1937, 1,600 people gathered at the plant to congratulate Adolph on his accomplishments for the year, and to wish him many more prosperous years. In 1940, bear was added to the menu of elk and venison. Over 1,500 people enjoyed the music of Tony Ferraro’s 8-piece orchestra with a soloist.