Calendar Girls and Cowboys have left the house 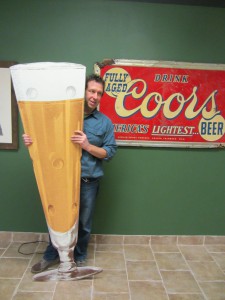 The classic pilsner weighs a ton.

All good thing must end, including the exhibit, Calendar Girls to Cowboys, The Art of Selling Coors. After wowing millions (or possibly even thousands) of visitors it’s time to strike the show after a 14-month run. While it’s kind of bittersweet dismantling something that took months to build, it’s also cathartic. Just like in life, change is the name of the game. I don’t mind though as I’m already playing with design concepts for the next show.

We documented the show with photos–we are a museum after all–and now it’s time to start returning dozens of loaned artifacts. I’m pleased to report that the museum purchased one of the large, exterior illuminated signs for the permanent collection. 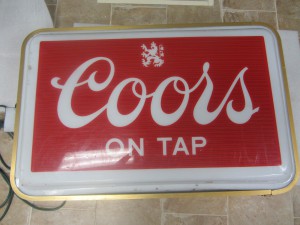 This c. 1977 Coors sign is now in the permanent collection. It even lights up.

For all of you Coors fans, rest assured that the next long-term exhibit will feature something Coors-related. Plans are already underway for Epic Events, scheduled to open September 16, 2016.