This is a rescheduled event from January 2022. 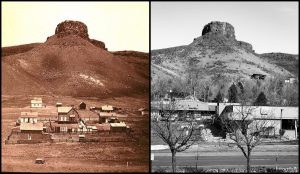 “Then,” for the most part, is the last quarter of the 19th Century; “now” is the first half of 2021. While perusing historical photos of Golden online, Stuart Sipkin came across a collection of photos that were mostly taken during the last quarter of the 19th Century. The variety and number of photos were perfect for a project he had been thinking about for a while – trying to recreate historical photos as precisely as possible in the modern day. Given the changes in the urban landscape, finding the exact location that the original photographer stood to take each photo was sometimes easy, but sometimes quite challenging. Join us at the museum to learn how Stuart used modern mapping and Geographic Information Systems to determine some of these locations and see the finished images of Golden’s changing landscape.

About the presenter: Stuart Sipkin

After working for the U.S. Geological Survey as a Research Geophysicist for 30+ years, Stuart retired to pursue a second career in photography. For the last dozen years, he has worked as a freelance photojournalist representing several European news agencies. While many of his photos have been licensed for use in print and online publications around the world, his likely most viewed photo appeared in Hillary Clinton’s book “What Happened.” Since the beginning of the COVID-19 Pandemic, he has been scaling back professional activities to devote more time to personal projects.