Now that I’ve read over the magazine article on the redlining subdivisions, I believe there is additional information that would be useful at least as regards the case of Golden itself and the Sunshine Park Addition. [See the high resolution version of the 1944 Sunshine plat map here, using the GHM&P Online Collection.]

When it comes to the question of whether redlining this subdivision would have impacted the occupancy of real estate in Golden and the current demographic makeup of Golden, my guess would be it didn’t.  The reason for this is because the Sunshine Park subdivision was partly stillborn; it posed some physical challenges and took some time to fully develop while in the meantime Golden had a major amount of undeveloped land throughout the rest of the city and a plethora of development opportunities. 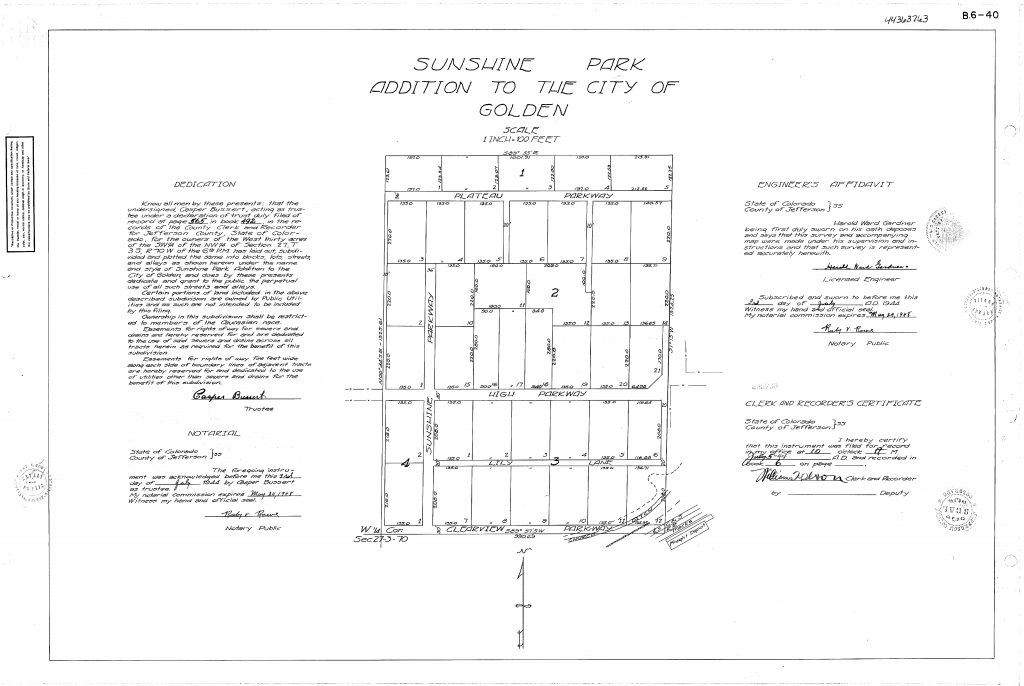 Once the wartime restrictions were lifted and severe building materials shortage eased new construction commenced, beginning with some by individuals in 1945, then large scale developers coming in starting in 1946, and after that the floodgates opened.  If a person of color wanted to get a new house in Golden there would have been a number to choose from (to buy or rent) in non-redlined areas of town.  I can’t confirm or deny whether any did but it’s possible.  The ones built under federal GI aid might even have been legally proscribed in the opposite direction from redlining.  The developers who finally got Sunshine Park fully built out in the latter 1950s were also building homes elsewhere in town; it was in 1955 that its streets finally got improved (as gravel streets, not paved, and by one of the developers).

Because there was so much building opportunity elsewhere in the city and a fair number of vacant land owners and assorted developers, with opportunities to add additional subdivisions to the city, one subdivision had no leverage on how the city as a whole was to develop; it was more like Sunshine Park ended up building out along the general timeframe of the rest of the city.  The apparent lack of other redlined subdivisions in Golden, including others created by the same creators as this one, makes me wonder if the existence of this one was primarily backlash against Butler and his group (as in the Council caved to a vocal group on this one but didn’t create or encourage a wider policy).

As for whether public officials around here might simply copy language without seriously considering or reading it, folks best not even get me started on that, you have no idea how many times I’ve pulled my hair out seeing errors copied again and again in property deeds and other instruments.  Golden itself is the same place where, unfortunately, we lost one life and had four others in the hospital because officials who were supposed to inspect the new post office’s engineering instead each assumed the other had done so and simply rubber stamped it.

I am aware of two other instances of building restrictions in Golden, but these are unrelated to racial redlining.  Kinney’s Addition was our first deed restricted subdivision, in 1867, when Calvin Kinney prescribed a minimum sized single house for each lot, of a size and with no limits on materials as to make one still economical for the time.  It appears his object was to prevent crowding shoddily built frame shacks that often popped up across early Colorado mining towns including ours.  Even at that though he only actually deed restricted two houses total and abandoned the practice afterward.  One, the Saunders home, still exists; in theory it can still revert to the Kinney estate if they knock it down and build something much smaller!  The other restriction was Golden’s creation of the fire limits in 1874 within which one can only build of brick or other non-combustible materials and not wood, unless granted an exception by the City Council.  This was in direct reaction to the great fire that swept Central City that year which Golden firefighters were instrumental in fighting, and Golden didn’t want to be vulnerable to the same fate.  That being said, Council started granting exceptions pretty much immediately (including the Loveland Fire Station in 1879) and by the time it was repealed they were granting them so much it was becoming a joke.  I’ve found when a good number of places that got built looking at the Council minutes.

An interesting historical irony in all this is that the oldest remaining home of High Parkway was actually built by a person of color.  It still stands, rather well preserved, at 112 High Parkway.  The Penrice Residence was built in 1879 by Clarissa Penrice, back when the street was called Eva Street, after Eva Berthoud, the young lady niece of Edward who platted Berthoud’s Addition it was in that year.  Clarissa lived here apparently by herself; she was married and neither widowed nor divorced, and I believe her husband must’ve been elsewhere in the state in his occupation, as happened with others such as at the Astor House.  I don’t know anything more about her, though I do know some more about Eva (she married, lived at Downieville and is buried today as Eva Hoyle at Dumont).  The home is a neat little piece of history there.

If you’d like to join the conversation for the greater good please drop me a line at mdodge@goldenhistory.org.