Golden History Talks: Early Golden and the Quest for the Capital 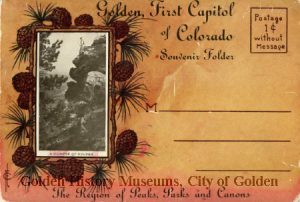 When gold was discovered in 1859, the population of the Rockies exploded. Reliable infrastructure, security, and governance was an immediate need. But the designation of a territorial capital sparked an intense power struggle that pitted Denver against the rest of the territory who wished to check the influence of the ambitious city. Golden emerged as the best suited town to claim the mantle of leadership—which it did temporarily in 1862. What happened after was a messy, personal, and salacious battle to secure the permanent seat of power. Suitable for adults.

Nathan Richie is the director at Golden History Museums. He holds an MA in Museum Studies from John F. Kennedy University and a BA in American History from Colorado State University. Previously, Nathan served as Director of Exhibits and Programs at the McCormick Freedom Museum in Chicago and as Curator of Collections and Programs at the Swope Art Museum in Terre Haute, Indiana.