Murder and the Shanghai Prize Fighter

Robert S. “Batt” Battalino was a prize fighter who was good enough to star on the TV sports show The Greatest Fights of the Century, and was evil enough to commit murder in the foothills west of Golden. You will hear the story of Batt’s life, his crime, and the unusual bond he formed with the County Sheriff as he faced death in the gas chamber.

Battalino was the first person executed for committing a crime in Jefferson County, Colorado.

This multimedia program will be led by the popular Dennis Potter, retired Captain with Jefferson County Sheriff’s Department. See and learn about genuine artifacts from the City of Golden collection such as the actual handcuffs used to restrain Battalino during transport. 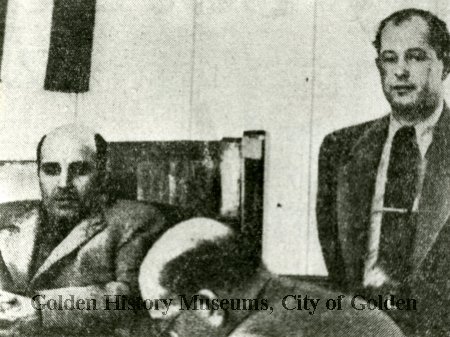 Black and white photograph of defendant Robert S. Battalino, during his court testimony for the murder of Michael H. Randolph on July 6, 1947 near Tiny Town in the mountains of Jefferson County, Colorado. Battalino is in the witness chair while the Court Clerk conducts business. Undersheriff Carl Enlow stands guard in the background.

Members always get a discount. Membership pays for itself with just a few programs for your family. Join us.

Program will be held at Golden History Center.