Farewell to Heritage Square Music Hall and the Golden Bowl 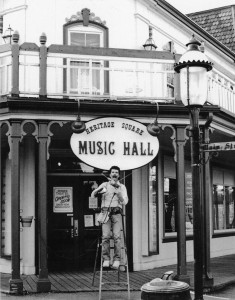 TJ Mullin installing the entrance sign he made himself.

It’s getting hard to find unique, home-grown entertainment options in Golden these days. Heritage Square Music Hall closed its doors last year with a New Year’s Eve blowout, and now Golden Bowl’s final days are fast approaching. Fortunately, there’s still Miners Alley and one can find a bowling alley in Lakewood, but it’s not the same. Local institutions like these define a community; they defined Golden. The Music Hall and Golden Bowl may have been rough around the edges, but that’s precisely what made them great. They were broken-in destinations that dished out good times and sent you home with a smile. Both will be missed.

So what’s a museum to do? Go in and salvage what remains. Ideally, I get to identify, research and collect key artifacts that will help capture the role these institutions played in the community. Often it’s a quick and dirty process.

A couple of weeks ago I was scrambling to walk through the closed Music Hall and quickly decide what deserved saving and what was still available while items were getting sold and removed the entire time I was there. Thanks to the generosity of the owners, I left with a commemorative champagne flute from the final performance and an old bar menu, some old photographs and an original script for The Phantom of the Music Hall. I also made plans to return and remove the main sign that graced the entrance for the past 25 years.

I’m already doing the same for the Golden Bowl which is slated to close in February. After 56 years in operation the building is scheduled to be replaced with a grocery store. Over the years through numerous expansions and remodels, owners have come and gone. While researching Golden Bowl’s history I got to know Maxine and Donald Jensen, who together with their family ran the place as sort of a community center for 24 years—the longest of any owners before or after. 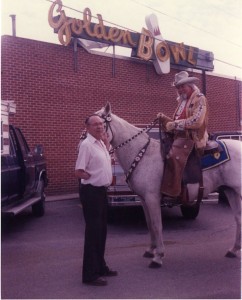 Even Buffalo Bill was a regular at the Golden Bowl. Donald Jensen is standing to his left.

The Jensens took over the bowling alley in 1974. It was an ideal location for them since they lived across the street at 2320 East Street. Donald was always a bowler, so while working full-time for Coors he also picked up a part-time job at the Golden Bowl. Before long the Jensens were running the place full-time. For years Coors sponsored employee bowling leagues which kept the lanes full nearly seven nights a week. And well-known bowlers come through the doors on a regular basis. I was intrigued to learn that scenes from a made for television movie were shot there in 1994. Released in 1995, Escape from Terror: The Teresa Stamper Story, was based on a true story from the files of Unsolved Mysteries.

I’m meeting with the current owner of Golden Bowl soon to select items for the museum. I have a short list and will find out what’s still available and keep you posted.

If you could pick one item to save, what would it be? Maybe a bowling ball, an old league trophy, the air hockey table, or the sign on the building? I’m curious to hear why too. You can reach me at mdodge@cityofgolden.net