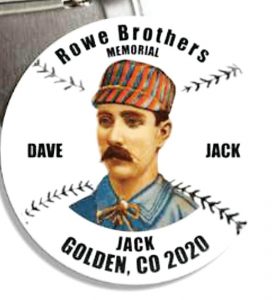 A commemorative button bearing an illustration of baseball player Jack Rowe created to commemorate the new monument to the Rowe Brothers at the Golden Cemetery. Photo: Golden Transcript

Long before the Rockies held court at 20th and Blake, the Denver Grizzlies hit balls at Sixth and Acoma in the late 1880s as one of Colorado’s first professional baseball teams.

It was a ragtag operation led by owner, manager and (yes, seriously) player Dave Rowe, a man who had already made a name for himself during a six-year big league career that included stints with teams in Baltimore, Cleveland and Kansas City and even a championship in St. Louis.

But it was Rowe’s contributions to establishing professional baseball in Colorado, which once led the Rockies to honor Rowe with the title “Colorado father of baseball,” that are perhaps his most lasting legacy.

Now, those contributions are enshrined in stone on a new monument honoring Dave and his brother, fellow 19th century major leaguer Jack Rowe, that was unveiled last month at the Golden Cemetery.

The effort to bring the monument to Golden began when Jim Lenarz, a lover of baseball history who also happens to be the Rowe brothers’ great-great nephew, read about an effort to raise money to construct a monument in honor of baseball hall of famer Deacon White. White and Jack had been teammates and part-owners of four different teams, including the Detroit Wolverines that won the 1887 World Series.

Read the whole story in the Golden Transcript; this is an excerpt.