Some amazing new artifacts for 2018

Home » Collections and Exhibits » Some amazing new artifacts for 2018

Founded in 1938, the museum turned 80 this year. By far, the major remodel was the biggest news of the year. If you have not visited recently, now’s the time.

On the collection front, we continue to improve the quality of and accessibility to the permanent collection, while contributing to a growing body of research. We also collected some amazing new items.

Some of my favorite artifacts for 2018 include:

Items include his garrison cap and Victory Medal for service. Bill fought in the Meuse-Argonne campaign and survived. 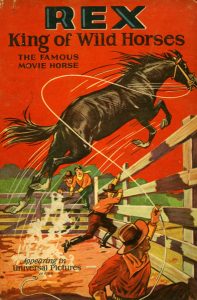 A fictionalized first-person account of the life and times of the “Famous Movie Horse” Rex, who was “discovered” in Golden at the State Industrial School for Boys. In the book Rex describes his early life, his wife, Mrs. Rex, also known as Lady, and his daughter, Rexella.

Collectors commonly call this Art Deco beauty the “Vail” vase. These came in six pastel colors. Ours is blue.

The last business operating at Heritage Square closed for good this summer. We didn’t have room for the 1977 Ferris wheel, so I settled for a bright red carnival game.

Items include recent menus, their famous appetizer tray service and china selected by chef and founder, Reed Pasco. After nearly 40 years in business, Golden’s only fine dining establishment closed its doors this year. Demolition is scheduled for next year followed by new development.

7. Postcard documenting escape from the State Industrial School for Boys, 1883

Sent by Superintendent W. C. Sampson to the Central City Sheriff, notifying him of William Combs’ escape. Sampson provides a vivid description and offers a $50 reward for his return. 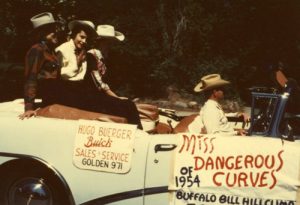 The Golden City Clerk transferred 18 boxes of archival materials to the museum for safekeeping. This major collection includes deeds, ledgers, registers, receipts and reports, along with a number of photographs.

Do you have a Golden treasure to donate or share? Let’s talk. I’m especially interested in documenting Golden culinary history. In 2019, we’ll explore some culinary history online and throughout our five galleries. Research is already underway, but I’d love to hear your thoughts on favorite foods, restaurants, grocery stores, food products (such as Coors Malted milk), recipes, or food personalities with solid Golden roots.