The finest parade Golden has ever seen

Home » Collections and Exhibits » The finest parade Golden has ever seen 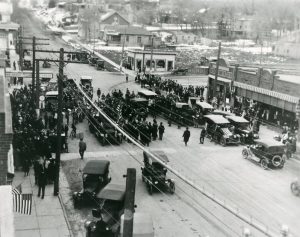 An impromptu parade formed to celebrate the armistice on November 11, 1918. Image taken from the roof of the Linder Block. The corner of 13th Street and Washington Avenue is visible.

It was a big deal when an armistice was signed, calling an end to World War I in Europe. News spread quickly around the globe. Along with the rest of the world Golden went a little crazy. This is what the Colorado Transcript reported November 14, 1918, three days after news arrived that World War I, or “The Great War” as it was commonly called, ended.

Golden Goes Wild When Glorious News of Victory Is Received

To say that the people of Golden went wild Monday when the glorious news of peace came over the wires, is putting it mild, to say the least.

Golden got the news shortly after it was received in Denver, and about 1:30 Monday morning, the people of the city were awakened with bells, whistles and shots, and then began a period of celebration that will long be remembered here.

The first news that Germany had surrendered came to George W. Parfet, a friend in Denver phoning the glad tidings to him. Mr. Parfet phoned to Alderman C. W. Owens, and he in turn spread the news to a number of friends. H. T. Curry, I. H. Petrie and H. D. West had the joy and honor of ringing the first taps on the central station fire bell, and only a few moments elapsed before everybody in the city knew what the noise was about.

Fred Robinson was one of the first on the job, and he got a young cannon to working, with double charges of powder in the shells. Bells and whistles in all sections of the city took up the chorus, and in less time than it takes to tell about it, a joyous crowd had gathered on Washington Avenue. 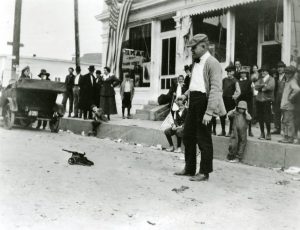 There was a scurrying for boxes and barrels and boards, and soon the flames of a great bonfire lighted up the streets. Robinson opened up a box of giant fire crackers, and the few people who remained in their warm beds were unable to get any more sleep that night.

Everyone who came down town took a turn at ringing the fire bell, which continued to peal out the glad tidings for more than seven hours, without cessation, sometimes as many as ten people would have holds on the bell ropes at the same time. Finally the strenuous ringing cracked the famous old bell, and it had to give up its share of the celebration. However, the church bells and north side fire bells continued to ring out for Liberty. 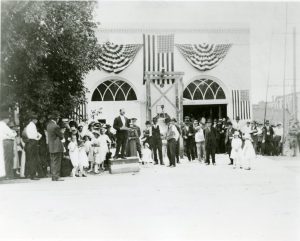 It has been suggested many times that Golden’s cracked fire bell be taken off  the tower and mounted in a conspicuous part of town, to show that Golden has a Liberty Bell, the same as Philadelphia. It is likely that this action will be taken, as everyone seems to be in favor.

Fearing that possibly there might be some people in the city who had not heard of the news of victory, a crowd pressed Duvall-Davison’s big truck into service, and two buzz saws, hung on iron bars, were placed on it. The pounding of these saws with sledge hammers made a din that would awaken the dead. Men and boys with drums and horns and cowbells mounted the truck, and every section of town was visited.

Then back at the bonfire again, and still the noise increased. By daylight the throng was still more increased, and breakfast was forgotten in the joy and excitement of the occasion. Flags began to appear, and soon the avenue took on a gay appearance.

At 9:30 the Industrial school band appeared and a big parade was formed, with scores of autos, trucks and marchers. Led by the band of the Grand Army men, members of the Red Cross and other organizations, the procession started, and when all were in line, the parade stretched out for fully six blocks, and in spite of the short notice that people had, it was the biggest and finest parade Golden had ever seen. American, French, and British flags were in profusion, and the sight was one never to be forgotten.

When the parade was finished, and the crowd gathered on the avenue again, speeches were made by Richard Broad and others, and Frank J. Reinhard asked the people to remember, in this hour of joyfulness the necessity of the fund for the United War Work, which will keep the boys happy while they await the order to sail for home. 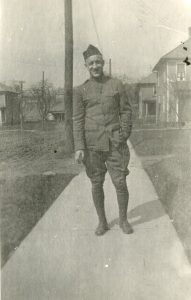 Bill Sauter poses in his World War I uniform, about 1918. At least 155 boys from Golden served in the army. Fifteen made the supreme sacrifice.

More band music followed, and then the noise-making instruments began again. It seemed as though the people could not make sufficient noise to express their joy over the big event.

The war was over, and finally there ended a day which Golden people can never forget.

Other communities in the county held big celebrations. Arvada, Morrison, Evergreen and other towns gave vent to their feelings, and every village and hamlet in Jefferson County went delirious with joy, for the war had ended, and the boys would soon be coming home.