If you haven’t seen the highlights of Richard Gardner’s Foss Ski Country decanters, you’ll have your last chance this summer. This temporary exhibit at the Golden History Center will be on view until Sunday, Aug. 14 when we’ll begin making room for a new exhibit celebrating the 125th anniversary of the Golden Fortnightly Club. 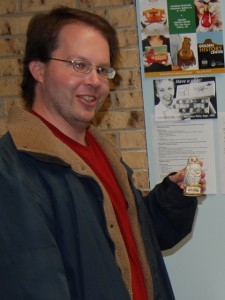 Richard Gardner shows off a favorite.

In the early 1970s Foss Drug introduced a house-bourbon called Ski Country that came in a choice of three porcelain art decanters sculpted in the form of skiers. Over the next quarter century, Foss produced 195 decanter designs, ranging from waterfowl and wildlife to Indians and rodeos. Ski Country decanters were made in limited editions of 120 to 12,000, usually in miniature and 750 ml sizes.
For a while the Foss Ski Country decanters were extremely popular, with their own national collector club, catalog, newsletter, and yearly auction. By the 1990s the decanter craze was over. Today, the Golden History Museum is one of the only places to see such an array of the various designs. Some are displayed in the museum’s online collection.
The decanters are on loan from Golden resident and historian Richard Gardner. 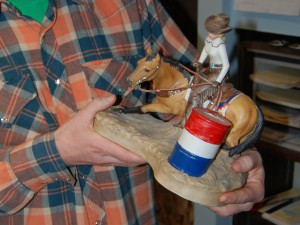 The “barrel racer” decanter from the Foss Ski Country series.

Finally, one of GHM’s primary goals is to collect artifacts that document Golden history. They include objects which were actually made or used in Golden and have a clear and specific association with some significant aspect of Golden history.
Do you have a Foss Ski Country decanter in your own private collection that you wish to donate to the museum? If so, please contact Mark Dodge at 303.278.3557.