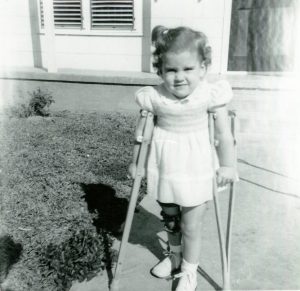 Three-year-old Betty Herron Gleaton walks outside for the first time with crutches and a new brace, 1955.

I was recently asked if I had been in an accident by a twenty-something who was referring to my crutches and leg brace. I told him “No,” that I’d had polio and he asked “What’s that? I’ve never heard of it.” My first instinct was to let him know he hadn’t heard of it because he’d probably been vaccinated for it when he was a child but instead I just told him it was the last pandemic- not the Spanish Flu as many people think.

He looked at me blankly and then asked if that was why I had the crutches. I said yes and told him polio caused paralysis. “Huh”, I’m sorry,” he responded. At that moment I was so glad Mark Dodge at Golden’s History Museum contacted me and asked me to write about my life, having survived polio which killed many thousands of people and left so many others with life-long disabilities.

I believe it’s important to have historical reference when going through times like these. During the polio pandemic public swimming pools were closed, airline travel was prohibited to those who had contracted the disease, and families had to stay inside their homes if they had someone afflicted with it. Sound familiar?

My story is not unique in that any story of disease or disability involves the whole family as well as the community at large. Parents having to take time away from siblings to care for the sick child, the financial strains, the ups and downs of treatment and the emotional toll illness takes on everyone.

For me, however, my story feels special because my parents, Don and Dorothy Herron, made living with polio, the treatments, corrective surgeries and the extended times in the hospital, bearable because of their unending love and support. My grandparents, Chuck and Mabel Herron (Chuck’s Market on Washington Ave.) and Bert and Jessie Thomas, my uncle Ken Herron, who also contracted polio while helping care for us, all played a big part in my dealing with everything that comes with illness and disability. 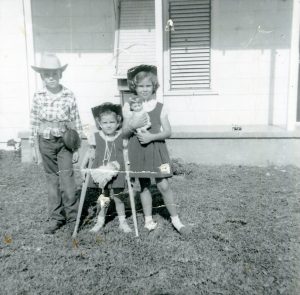 It was late July 1954 when polio hit our little south Texas town, Alice. This is where my dad, Don Herron, had his first job after graduating from Colorado School of Mines. It is where I, at 22 months old, and my entire family fell ill with the virus.

My parents had to be hospitalized for a couple of weeks in Corpus Christi but I had more lasting effects from the disease. I was taken to the Warm Springs Rehabilitation Hospital in Gonzales, Texas. Warm-water therapy helped with the stiffness, pain and mobility. I was between two and three years old at the time and spent several months there with my parents being allowed to visit only 45 minutes on Sundays.

When I was five my dad was able to transfer back to Golden and the series of corrective surgeries began in my kindergarten year. There was always a cast involved with the surgery so whenever I was recuperating at home, mom would carry me to the backyard on nice days and lay me on a lounge chair for some fresh air.

My most involved surgery involved cutting my shin bone in half horizontally and stretching my leg twice daily for a month (the polio affected leg was two inches shorter than the other). I spent most of that year in bed in a body cast and to get through the hot summer mom would bring bags of ice and lay them on the cast to cool me down. To bathe me she would set a chair with a tub of warm water by the edge of the bed so she could wash my hair and upper body. What she went through for me!

The surgeries and physical therapy went on throughout elementary school, but my parents made sure I could go to our neighborhood schools, not the Boettcher School for disabled and wheelchair-bound kids. They found travel opportunities when a school sanctioned group wouldn’t accept me. They signed me up for 4-H for me when my siblings joined Westernaires. It was because of their efforts to make my life “normal” that I saw myself as just that.

This blogpost is an excerpt. Click here to read Betty’s entire memoir in the GHM&P online collection.

Tip: click the “additional media” link at the bottom of the new page.