Golden United is spotlighting tried and true Golden businesses located off the South Golden Road corridor in Pleasant View. Pleasant View is a vital part of Golden with a rich history, and an area undergoing a kind of renaissance. The history of the area deserves more recognition and research. Several businesses which have stood the test of time include Mannie and Bo’s Pizzeria, Rock Rest Lodge, Eggers Lapidary, Mier Deli, and of course the Columbine Bar, featured here. Enjoy this good read by Sandra Dallas with photos by her daughter Povy Kendal Atchison. And maybe I’ll see you at the Columbine! 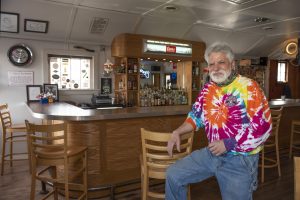 Ever since the popular Columbine Bar opened its doors at the end of Prohibition, it has overcome economic hardships. They include recessions and nonsmoking laws that sent patrons to private clubs to smoke. But nothing has challenged the bar’s business as much as the current COVID crisis, which shut down the Columbine for six months. When it reopened, it was allowed to operate at 25 percent capacity—just 12 persons.

But “we made it!” says Chris Artemis, who took charge of the bar five years ago. He can now seat up to 40 customers. That’s almost the bar’s capacity. Still, with social distancing and folks staying at home, Artemis is taking no chances. In June, he’ll start featuring bluegrass music every Thursday. The sessions will be held outside, where the Columbine can accommodate 100 to 150 concert-goers, and the bar will have food available. The Columbine will also bring back Friday night fish fries.