The year 2020 is proving to be a year of epic events. A global health pandemic, an economic crisis, and major social unrest are dominating current events near and far. Locally, the City of Golden turned 161 years old, the Golden Chamber of Commerce marks 100 years, and the Golden Civic Foundation (GCF) turns 50. 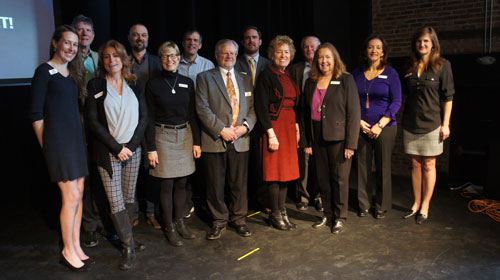 The Golden Civic Foundation Board in 2019.

Since the Golden Civic Foundation does so much for the community, it’s a pleasure to celebrate with them. In the late 1960’s several business owners saw that Golden had many needs for which tax revenues and other public funds were simply not available. They therefore formed the Golden Civic Foundation. The Foundation was incorporated on April 14, 1970 and their first organizational meeting was on May 19, 1970. The first Board of Directors included F.A. Foss, F.J. Pattridge, W.G. Brown, C. Goudge, and R.W. Todd.

Development Director Julie Bartos shared 50 major accomplishments the group is celebrating throughout the year. Here are a few focused toward civic redevelopment:

As part of our original mission to revitalize downtown Golden (starting in the 1970s), civic development was a top priority. One of our first major projects addressed the need for hotel services. The Foundation purchased the Holland House for $290,000 after the bank foreclosed on the previous owners and facilitated the re-development of the property into the Table Mountain Inn that we know today.

In order to preserve the historic Golden Junior High School building, the Golden Civic Foundation purchased it from the School District in 1992 for $48,000. Spearheaded by then Mayor Marv Kay (also on the Foundation Board) and Glen Porzak of the American Alpine Club, an agreement was reached whereby the American Alpine Club and Colorado Mountain Club purchased the property. The two organizations formed what is now the American Mountaineering Center (AMC) – the nation’s premiere facility for mountaineering education. In addition to the building purchase, GCF also provided a special grant to the AMC in 2016 to help improve the entrance staircase.

Over the past 50 years, the Golden Civic Foundation has provided several hundred thousand dollars in funds for City “beautification” projects. Some of these projects include public art, flower planter boxes and lighting, trash receptacles, parking lots, gardens, parks, holiday decorations, “Howdy Folks” arch refurbishment, cemetery irrigation and improvements, street paving, and landscaping. These projects have allowed for Golden to grow as a tourist destination along with bringing joy to the local Golden community.

This is only the tip of the iceberg. I’m recording an interview with Executive Director Heather Schneider, and longtime board members Marv Kay and Pat Madison later this month.

Want to support their work in Golden? Their annual fundraiser is scheduled for Saturday November 7, 2020.