Golden lost two change-makers on the same day: Irma Wyhs and Robert Harmsen. I recently learned that they both died on June 20, 2019.

When it’s possible, my approach to history is to get out and talk to the history-makers themselves. History is a record of the passage of time, chock-full of beginnings and endings that are bittersweet. This is one of those occasions. Irma and Bob both played pivotal roles in the history of our community and beyond. I had the opportunity to work with and learn from them both during my time here, and I’m grateful for that. Irma and Bob, you are gone, but you won’t be forgotten.

Robert (Bob) Harmsen passed on June 20, 2019. Growing up in the family business founded by his parents, he started working for the Jolly Rancher Candy Company part-time at age 16. Over the course of his career, he did everything, and ultimately, took the helm as President in 1977, when his father Bill stepped down. 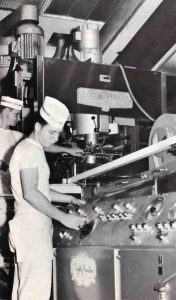 A young Bob Harmsen at work inside the Jolly Rancher plant.

The second Harmsen son, Bob apprenticed in Europe for a year at Baker Perkins, a candy equipment manufacturing company and then worked with engineers in a number of other candy plants across Europe. He then managed the Milk Dud production at a the M. J. Holloway Company in Chicago before coming home to Jolly Rancher to oversee their vast transportation network

Bob was proud of his family history and the role they played creating a candy empire known around the world. For a number of year he’s served on the board of the museum when it operated as the Golden Pioneer Museum during the early 2000s.

Irma Wyhs arrived in Golden in 1963 and quickly went to work creating an arts center together with her former instructor at the Chicago Art Institute. The watercolor classes they offered became the basis of Foothills Art Center, and Irma became its first director. And the sidewalk art shows they established grew into today’s Golden Fine Arts Festival. 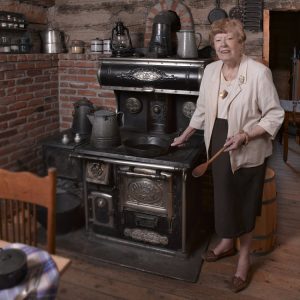 Irma inside the Pearce Cabin at the History Park she so loved.

Irma became director of Golden’s Pioneer Museum in 1989, where she began the successful Columbine Day Festival. But what Irma is most proud of is helping to establish Clear Creek History Park. With help from the city, she managed to acquire two pioneer cabins and a barn and had them moved from Crawford Gulch to downtown Golden.

Irma wrote history columns, one every week for five years, for the Golden Transcript, and she still writes for all the west suburban papers.

Golden is filled with legendary people. If you feel there’s someone we should know about, please reach out.