If you have yet to visit the Golden History Center to see and hear Turn it Up: Golden’s Musical Memories, don’t worry, you still have time. And even though it opened in June, new leads and stories on additional Golden music makers continue to come to light. Recently, Ann Camey brought a few new connections to my attention. 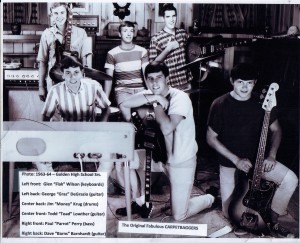 Golden’s Futile Five are already highlighted at the museum, but another group of guys out of Golden High formed the Fabulous Carpetbaggers in the early 1960s. The original lineup for this rock and roll band included: Glen “Flak” Wilson on keyboards, George “Graz” DeGrazio on guitar, Jim “Money” Krug on drums, Todd “Toad” Lowther on guitar, Paul “Parrot” Perry on bass, and Dave “Barns” Barnhardt on guitar.  A few of the members from this group are still playing pure unadulterated rock and roll in the area under the name “The Blank Brothers”. Their most recent CD is titled None of Your Business.

At about the same time, another of Golden’s own, Doug Lubahn, was gearing up to make his own mark on the musical world beyond Golden.  After graduating from Golden High in 1965, Doug left town for Aspen where he became a ski instructor by day and bass player by night (as a kid, Doug studied the French horn, but switched to bass guitar at age 14). While in Aspen, Doug was discovered by Cass Elliot of the Mamas and the Papas, who convinced him to move to LA where good bass players were in demand. In 1967, Doug found himself playing bass with “The Doors”, and recording Strange Days, the first of three studio albums he worked on. During his time in LA and NYC, Doug crossed paths with a number of well-known musicians like Miles Davis, Bob Dylan, Ted Nugent, and Billy Squire. He even let Jimi Hendrix jam on his bass during a “Clear Light” show.
Doug published a book a few years ago titled, My Days with the Doors and Other Stories. I’m in the process of getting a copy for the museum. Maybe the museum can also get the electric bass he used while recording Strange Days?

Just because an exhibit opens it doesn’t mean the fun stops.
If you know about another musical angle I’ve missed-please share.
Rock on!
Mark Dodge, Curator