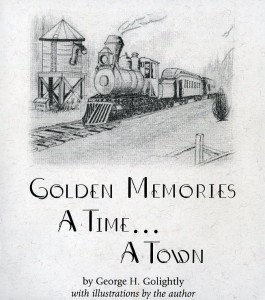 What were Golden’s streets like in those days? That’s an interesting subject. Let me shift my memory into reverse and I’ll tell you what I remember.

Golden Streets! Sounds like the streets were paved with gold doesn’t it? They weren’t, but they did contain garnets. Garnets are red silicate crystals that are not precious but can be made into attractive jewelry. They rate about two points above glass.

You see, Golden’s street department, Bob Mathews, Supervisor, an occasional helper, a road grader, a gravel wagon and a team – kept the streets in repair. There were no paved streets, mud could be a problem and to keep traffic moving, (few cars but many wagons) gravel was dumped on all streets and spread with a horse-drawn grader.

The red gravel came from a gravel pit west of town. The street maintenance people loaded the gravel wagon by hand, using picks and shovels, and they unloaded the gravel unto the streets by removing the boards in the bottom of the wagon. When a shiny red garnet was found in the gravel it was quickly recovered and pocketed by the workers. Golden’s streets had many red jewels in them but no gold.

Golden was divided into four wards or districts. They were separated North and South by Clear Creek, and East and West by Washington Avenue. The city council, composed of representatives from each ward, insisted on equal road work and repair in each ward. The six day work week (common then) meant that the street crew spent about a day and half each week in each ward, to keep the small town politicians happy.

In summer, the street supervisor hitched his team to a dilapidated tank wagon, filled the tank from the nearest fire hydrant, climbed aboard and the sprinkled the streets with water to try to stay the dust. Hot, barefooted kids like me loved to run through the spray from that tank wagon.

In winter the road grader was used to remove snow from the main street. If the snow was deep Golden’s citizens, many of whom owned teams, would turn out to help. By pulling wedge shaped drags over Golden’s streets, they and the city workers made the streets passable for the doctor and the grocery wagon. There was no compensation to the citizens of Golden for their help. Golden was their town and whatever the emergency might be, there exited spirit cooperation and helpfulness that doesn’t seem to exist today.

In 1913 Golden had the heaviest snow fall the city so far has ever recorded. Practically all of the horses in town were put to work plowing out drifts of as much as eight feet in depth. Some Goldenites had to tunnel to their barns and woodsheds, and food and medicine became something of a problem.

One of our neighbors attached straps to two barrel staves making them into skis. By using these skis and pulling his son’s sled, he was able to make it to the grocery store, whose doors had been cleared by the citizen’s snow team, and return with a few staples for the neighborhood. The store soon emptied of provisions. Just in time, a train plowed through from Denver with much needed supplies.

My family had many pictures of this storm and told many talks over the years. Dad told of the teamsters driving their huge draft horses pell-mell into the eight foot drifts trying to break down the crusted snow. The teams were backed off then driven hard into the drifts again and again. When the horses tired, other teams took their place. Everyone helped in the emergency. 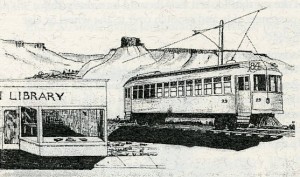 In summer, the water fountain in front of Dick Broad’s Dry Goods store, which occupied the building on the Southwest corner of 12th and Washington, was a favorite spot for loitering youngsters. When it was removed much criticism was heard, but the city fathers deemed the removal necessary because of increasing traffic. They then erected a cement based flag pole in the middle of 12th and Washington Street intersection. The theory behind this move was to force cars to go around the pole if turning left into any of the streets at the intersection. No more cutting corners!

Fred Beamer Sr. used to approach this intersection with his horse-drawn vegetable wagon, survey the possibility of an automobile approaching, then slip across the corner inside the flag pole. My Dad was the city marshal and his job was to uphold the law, but never did he give Fred a ticket. He was always interested in something inside Koenig’s store window.

I remember Fred was something of a ventriloquist. His horse always wore a straw hat which was funny to me but when the horse talked to me I nearly had an accident.

It was my Dad’s job to raise and lower the flag each morning and each evening. On occasion, Dad let one of us help him with this serious ceremony. I did learn to fold the flag in the triangular fashion and have remembered how to do it to this day.

When Golden was finally ready for paved streets much contention erupted among the citizens. How would the costly job be paid for? Who should get the contract? Which streets should be paved first? Washington Avenue won the designation easily because of the county Court House location, but where next? North side or South side?

Asphalt paving was something new to Goldenites. The old timers were dubious about such a soft sticky substance being used to cover their streets. Wouldn’t horse’s hooves stick to the street? Would tires stick? Would it be safe to walk across the street, especially in hot weather? There were the questions of the day. We wonder of their importance as compared to the problems of our world today. Finally, after the paving was started and the old timers had their curiosity satisfied, the only question was whose street would be next.