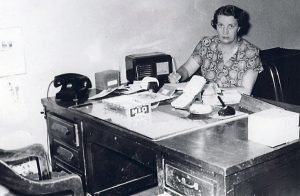 Virginia (Miller) Weigand behind her desk inside the Jefferson County Republican offices in Golden, about 1938. She worked as the society editor until promoted to editor when her father and publisher, James Cuyler Miller, died in 1939.
Golden History Museum & Park, City of Golden Collection

Issues of the Golden Transcript, covering 1974-1977 are now available online through the Colorado Historic Newspaper Collection. Together with our partners at the Jefferson County Archive, we’ve digitized thousands of pages of the Transcript over the past four years. So far, the museum alone has invested $20,000 in the project.

It’s so great to hear from the many people who regularly use of this free resource. If you’ve never taken a look maybe it’s time to explore for yourself. It’s fun to browse, and you may even get addicted to looking through old advertisements, gossip columns, or local sports scores. There’s serious city business to consume too! I regularly use it myself to support and corroborate research and identify new subject matter. The Museum is used to documenting the past, but now we’re looking forward and planning for the future with hopes of digitizing other Golden papers.

You might assume Golden was a one-newspaper town with the Colorado Transcript (also known as the Transcript, Daily Transcript, and Golden,Transcript) but that’s not the case. Between 1872-1990, Golden even had competing papers. What one paper didn’t run, another would. According to “Colorado Newspapers: A History & Inventory, 1859-2000,” over the years Golden was home to 13 different rags. Other lesser known papers included: Western Mountaineer, Golden Eagle, Golden Globe, Jefferson County Republican, Colorado Central, Jefferson County Graphic, People’s Press, Rocky Mountain Mountaineer, Union News, Outlook, Free Press, and finally, the Golden Advertiser. I would add the Colorado School of Mines Oredigger to the list, increasing the count to 14. Unfortunately, little is known about some of these papers.

Each paper had different agendas and advocated for different opinions of the day whether on the state level or within city limits. And as newspapers owners and editors changed, so did editorials and positions. For many years, George West’s Democratically leaning papers were opinion leaders for the mountain towns wanting out from under the influence of Denver’s reach. By 1872, the Golden Eagle’s presses were running, giving voice to the Republicans who were the dominant political party of the day.

So read on, Golden. We’re committed to sharing content from multiple viewpoints, past and present. 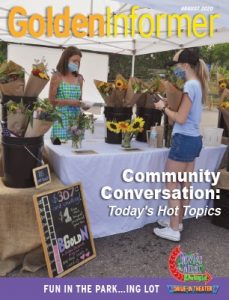 This article also appeared in the August 2020 issue of the Golden Informer.