The Golden Outlook, also known simply as The Outlook, was founded in 1946 by brothers George A. Barley and John W. Barley under parent company, Jeffco Publications. The Outlook was published at Golden as a weekly paper on Friday mornings. It was printed on a letterpress in a five-column tabloid format, covering all of Jefferson County, Colorado. The newspaper office, located at 11th and Arapahoe, ceased to operate around 1990.

Over the years The Outlook bought and merged the following papers: Wheat Ridge Times-Graphic, Edgewater News, Evergreen Mountaineer, and the Lakewood Leader. The Barley brothers also founded the Jefferson County Shopper in 1960. 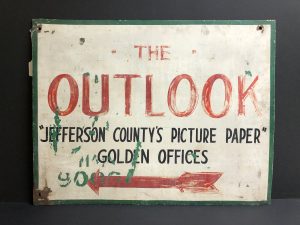 A sign that hung at The Outlook office is now on display as the exhibit, Signs O’ the Times.

Georgia (Barley) Keller recently who shared these memories of her family’s newspaper:

“My dad, George Barley, was a newspaper man. He hailed from Kansas, from a family of newspaper folks. He came to Colorado in the mid-1940s and established the Golden Outlook newspaper. He published that paper for the next 40 years or so, along with his brother John William Barley in the early days. But always with his mother, my Grandma Margaret C. Barley. He also published the Golden Family Directory for many years. 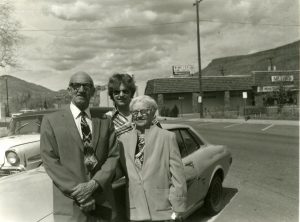 George Barley, Alex Barley, and Margaret Creighton outside their home in Golden, which was about a block away from The Outlook office at the corner of 11th and Arapahoe.

One of my most lasting memories was watching the linotype machine in operation. The linotype is a hot metal type setting machine that cast individual lines of type on slugs that were then placed in wooden trays on the letterpress printing press. To me as a grade school child the linotype was a fascinating and mysterious machine – and BIG! The operator typing away, the smell of the hot metal, and the clatter of the metal pieces as they travelled along the top rail. The resulting slugs were placed in wooden galley trays and proofs were pulled – long, narrow lengths of printed paper that were then given to the proof reader for corrections. My Grandma Barley was usually the proofreader. I can still see her sitting at a HUGE roll top desk with her red pencils at the ready – she had lots! Her desk was right inside the front door of the office, along with a very large rubber tree plant.

I also remember the printing presses. Initially Dad had one that printed on large single sheets that were then transferred to a folding machine. Later he acquired a larger press that used big rolls of paper that printed in continuous length, then cut and folded in the same machine.

My Dad always employed a linotype operator to set the type and a few other people to help in the shop area, and some to sell advertising. He often employed CSM students. But Dad did a great deal of all aspects of the work himself. 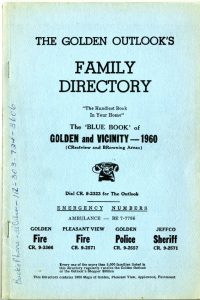 The Outlook offered a full menu of print-related services which included Golden area directories. The museum has several from the late 1950s-early 1960s.

The Outlook was a small weekly paper but still required constant efforts. Dad was “up at the office” pretty much all the time. He would come home for lunch and dinner, then go back to the office and come home at 10 pm to watch the news and read the two Denver daily newspapers. Every Thursday evening he would attend the Golden City Council meeting. Then back to the office to get the paper out for the Friday publishing date, usually all night and into Friday morning.

Publishing The Golden Outlook was everything to Dad. He did not make much money out of it, but enough to provide for his family with the necessities – and a few extras sometimes.

Dad would be pleased to know – all these years later – that people were interested in the work that he had done.”