“Flu situation here is getting dangerous,” blared a headline on the front page of Golden’s Colorado Transcript newspaper on Dec. 5, 1918. 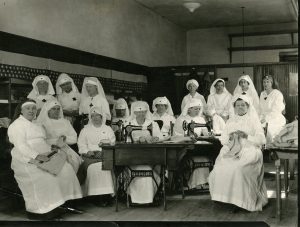 The women of Golden’s Red Cross sewing club, c. 1915. During World War I a wave of patriotism surged throughout town and many residents became active in the war effort. Many women became active in the Red Cross organization. One of their tireless efforts included hand-knitting wool socks for soldiers. Photo: Golden History Museum & Park, City of Golden Collection.

Though it’s more than 100 years old, this historic news story about Spanish influenza could’ve been written in 2020. “Clearly, there are similarities between the current pandemic and its 1918 predecessor,” said Mark Dodge, curator of the Golden History Museum. “Amazingly, the 1918 pandemic was mostly forgotten history until now.”