MEMOIRS of my treck across the Plains, by Mrs. Mary Kalbaugh Whited

Home » Collections and Exhibits » MEMOIRS of my treck across the Plains, by Mrs. Mary Kalbaugh Whited

MEMOIRS of my treck across the Plains, the last time in 1870, and early childhood days. 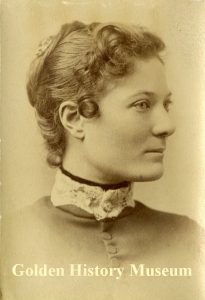 It was in April, 1870, my Father with his family, also an uncle, Wm. F. Hunter, and family and other neighbors and people from Rock Island, Ill., left for the West seeing a fortune. There were all covered wagons, a carriage Father had made for the family’s comfort, and one cart hauled by oxen for packing wood on from one camp over night to the next camp.

We were two months crossing,–three the other two times,–first one in 1859. Time was monotonous, day after day with occasional break in monotony. Every so many miles apart would be a well or stream of water, and campers might stop to make sure of water. On one occasion teams were all ready to move on for the day and we had to forward the Platte River nearing Denver.  A soldier came riding up on high-stepping bay horse – broad-brimmed hats, Etc. –  and told us to cross over as quickly as possible, to hurry across as the scouts were bringing a bunch of Indians for the summer and would bring them over this ford – teams were ready to pull out for the day’s trouble when he rode up and there was some rushing to get over, and as soon as all were across, Mother and Sister Clara began to wring their hands and scream. I was too small to grasp the situation. My two-year-old sister had wandered off a short distance picking flowers and was overlooked in the big rush. Buffalo Bill grasped sister in his arms, across-the-board and placed her in Mother’s arms and seemed not to recognize he had done any noble deed. I was talking to Mr. MacDonald about this and he said that was exactly as it happened. He was one of the scouts with Buffalo Bill taking the Indians to the North Reservation. 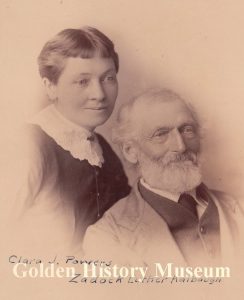 Another time darkness came on before my four brothers and other young men got the stock to water. They remained out all night, – campers being afraid to have a fire at night for fear of detection by Indians. Father with others met the boys coming with stock. Mother walked the camp circle all that night. In the morning campfires were made and we had a feast for a king set out, – home cured meat, eggs packed in salt – keep fresh in salt – and sour dough [sic] biscuits that came out of the Dutch oven light enough to raise the lids off the ovens. We brought two muley cows that were pets for a long time after our trip was finished,  gave us plenty of milk and cream, and I am sure many a city family had not the breakfasts our colony had each morning. Of course, each family had their own supplies and plenty of them. I don’t remember how we did at noontime but I imagine a cold lunch, as we seemed too rushed to get through. Indians broke out and killed a colony of campers, keeping some of the women. This was known as the Meeker Massacre.

Tip: scroll to “associated records” at the bottom of the new page and click the memoir link, then scroll to “additional media” to find the PDF of the original typewritten document.