Movie night with the King of Wild Horses

I’ve written about Golden’s homegrown movie star, Rex, before (he was a Morgan stallion, in case you forgot). But now, you can watch him in his acting debut, “The King of Wild Horses” from the comfort of home.

From the June 2019 blog post, here is a little about Rex from Linda Graf: “After a Colorado rancher bought him, he ran wild on the plains of eastern Colorado (I don’t think it was too far from Golden), and may well have suffered abuse again in the violent sort of roundup that occurred to get him back.  He killed one of the wranglers and the rancher ordered him shot, but a reform school in Golden (Colorado State Industrial School) took him to breed.  They couldn’t “break” him either, so they chained him in a stall for two years and boys abused him there.  From all that he suffered he collected a wide range of odd and very violent behaviors.”

Many of Rex’s movies survive, so last year I snagged this digital copy for the collection. In 1924 it was marketed as “…a new five-reel feature produced by Hal Roach, featuring “Rex,” a magnificent wild horse.” 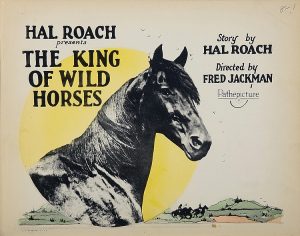 At about an hour long, it deserves your time. While it only contains moderate violence and little gratuitous sex, it’s still worth watching. Rex, known as, “The Black” in the film, frustrates ranchers who would break him and his herd of mares. There’s a love story too.

For all of you film critics out there, I’d love to see your comments below. Enjoy, and pass the popcorn, please.