Lesson takes between 60 minutes and 120 minutes

Objective:
This lesson is designed to help your students understand the way the borders in Colorado changed and how that affected citizens living in the areas which suddenly switched nations by the simple signing of a treaty. Students will see that borders are laid atop the land where people already lived and overnight they found themselves with a new government and set of laws by which to abide. 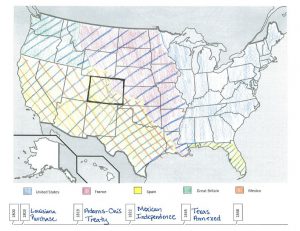 Put the PowerPoint up at the front of the class and have the students fill in their map as you explain the changes to the landscape due to wars, treaties, and legislation. Teachers should follow these instructions.

Have students turn and talk to each other or discuss as a class. Repeat the questions from earlier, and discuss the new ones. Have their opinions changed? Why?

OLD: What is a political border? Can borders change or move? What causes borders to change?

OLD: What happened to everyone living in the territory? Did they have to move to France?

Were they still French citizens?

NEW: Who was living here before any of these European groups claimed the land? How do you think the map would look if we showed these groups as well?

NEW: Do people who live in different countries have different rights? Can you think of any examples? (An example from this time period is that Mexican women could inherit land and money if there was no male heir, this was not the case in the United States) How would you feel if you suddenly were not allowed to do something you had been able to in the past?

Choose four students to be it (you can name them France, Great Britain, Spain and the United States). The rest of the players will scatter about the playing area. On the signal, the “it” players will attempt to tag the other players. A tagged player, must join (literally, they must join a hand) the “it” and continue developing the blob. As more players get tagged, they must add onto the outside of the blob. So, at any one time, the blob will only have two hands available for tagging (one on each end). The more players that get tagged, the larger the blob grows. The object of the game is to be the last player captured by the BLOB.

Following are some rules:

Return to Listing of Lessons