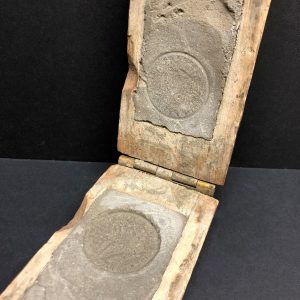 A unique artifact “rediscovery” recently reminded me that not all early 1900s residents of this area were paragons of virtue.

While working in our offsite artifact storage area, I found an object tucked away in a nondescript box, carefully covered in tissue paper. Curious, I unwrapped it to find a wooden item, battered and worn, and obviously handmade.

My interest piqued, I checked our museum’s database. Sometimes there is very little information to be found but this record was surprisingly specific.  A counterfeiting machine, the old notes said, donated in 1954. I remember glancing, perplexed, at the homely, rough-hewn artifact sitting nearby. I decided to look into this and followed a name that was associated with the item in the record: “N. E. Smith.”

A little research uncovered the story behind this unusual artifact. The Colorado Transcript ran an article on June 24, 1909 titled “Crude Attempt at Counterfeiting.”

“An extremely crude mold for counterfeiting half dollar pieces was found last week at the Doane stone quarries by N. E. Smith, superintendent of the quarries. It was brought to the Woods-Rubey bank, and may be turned over to the U. S. authorities for investigation. The contrivance is crude in the extreme, and could hardly have been expected to cast a coin that would deceive anyone. It is constructed of two small flat pieces of wood, hinged together. The boards have been hollowed out and filled with clay, in the center of which is the impression of a half dollar. When the boards are locked together a small aperture is left at the top in which to pour the metal. The mold had been used, as shown by scorched places at the opening. The mold was found under a pile of rocks at the quarry, and it may be that experiments were being carried on there, but the workmen engaged in reopening the quarry frightened away the would-be counterfeiters.” 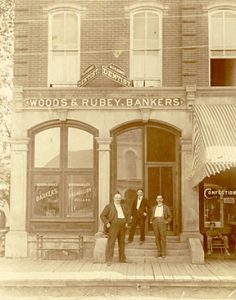 The Woods-Rubey Bank where the counterfeit mold was taken for evaluation. The bank was located on the corner of Washington Avenue and 12th Street in Golden.  Golden History Museum & Park, City of Golden Collection

Foiled in their attempts to create easy money, this handmade contraption speaks to the motivation and ingenuity, if not the upright character, of the people behind this story.

Peruse the online collection to discover more unique treasures in the museum.