Lookout Mountain Funicular — a ride of a lifetime

I receive research requests and collection inquiries on a weekly basis. It is a great opportunity to refresh my knowledge base, learn something new, and share it. Questions about Golden’s two funiculars are common. Here is some background on the Lookout Mountain Funicular Railway. 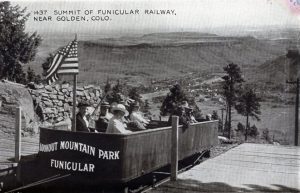 A grand view from the summit of the funicular railway.

The funicular was the idea of Rees Vidler to promote and provide access to his Lookout Mountain Park Development Company. Construction started in 1911 with Colorado School of Mines students helping survey the route. In July of 1912, the funicular celebrated a grand opening with Denver Mayor Henry J. Arnold and Colorado Governor John F. Shafroth driving the last spike.

The ride of a lifetime?

Visitors rode by trolley from Denver to Golden and then hiked or boarded a Stanley Steamer, which took them to the loading station at the base of the incline. The cable-operated funicular operated between two stations with a hoist and heavy machinery located at the top. The cars balanced each other out; as one went up the other went down. Two open air cars, each carrying 32 passengers, whisked riders up the 2,740-foot incline with a 67 percent grade (that’s steep). Passengers faced the east with their backs to the mountain while the car hoisted them to the summit. Once at the top passengers could hike, picnic or simply enjoy grand views of Golden and Denver.

It operated until the fall of 1916 and then closed due to bankruptcy before ultimately entering foreclosure in 1919. An alternate route to the top of Lookout via “Cement” Bill William’s 1913 Lariat Trail contributed to its demise. Today all that remains is a narrow cut on the northwest slope of the mountain just below the television and radio towers. The old tracks remained undisturbed until World War II when the hoist, machinery, and rails were removed for a war-effort scrap metal drive.

The current “Historically Jeffco” (Issue 37, 2016) is dedicated to transportation in Jefferson County, and includes an article on funiculars. Additionally, Barb Warden wrote a short book on the topic titled, “The Funiculars of Golden Colorado” in 2012. It is available for purchase at the Golden History Center (now Golden History Museum) for $15.

Let me know if you have something to add.