Most Wanted List: How does the museum decide what to research?

Home » Golden Informer » Most Wanted List: How does the museum decide what to research?

The following article originally appeared in the May 2015 issue of The Golden Informer. 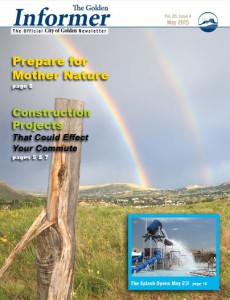 Every year museum staff undertakes new research areas. Sometimes this means identifying undocumented items already in the collection and deliberately fleshing out their local significance, if any (such as finding an 1858 Gold Rush-era map of Golden City in off-site storage last summer). Sometimes it means researching an unknown or underappreciated aspect of Golden’s history. (There are many: What was Golden’s first pizza joint? Where was the red light district?) Sometimes we’re on a crusade to verify information that already exists and challenge assumptions. (Is Golden really named for Tom Golden?) Sometimes we’re driven by external factors to record community change. A beloved Golden business is closing (Heritage Square) or a landmark is slated for demolition, for example. And sometimes, we’re pursuing a personal curatorial interest (I love old Westerns, so I’m fascinated with Golden’s role in the nascent silent film industry). 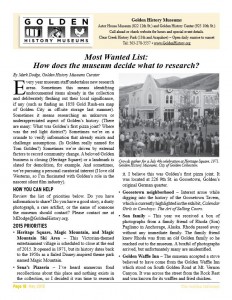 Review the list of priorities below. Do you have information to share? Do you have a good story, a dusty photograph, a rare artifact, or the name of someone the museum should contact? Please contact me at MDodge@GoldenHistory.org.