Golden History Museum & Park and the City of Golden Parks Division are partnering on a construction project to improve trail usability and to enhance the museum patio to better accommodate outdoor programs and events. “COVID-19 has significantly impacted how we can serve and engage with our community. We’ve moved most of our programming online, which has been incredibly popular. At the same time, we know that people miss attending programs in-person. And because we aren’t confident the pandemic will be over by next year, we’re taking this opportunity to make some enhancements that we’ve long been planning in order to accommodate more programs and events outdoors,” said Nathan Richie, Museum Director.

The site improvements include multiple components. On the Creekside Patio of the museum, the old, uneven and broken concrete will be replaced. The patio will also be extended partially to the east, west, and south where it meets the Clear Creek Trail. New twin staircases will allow visitors to easily and directly access the museum entrance from the path. The existing stairway will be demolished and returned to natural landscaping. Safety rails will be installed along the perimeter and sun sails will be installed to provide needed shade on the museum patio for program and event attendees. 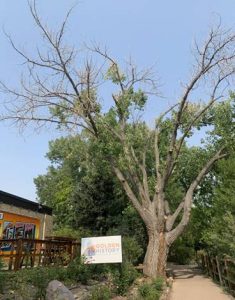 On the trail, two pinch-points on either side of the current museum entrances will be widened to allow traffic to pass by more easily. An ADA accessible ramp will be installed to better accommodate wheelchair access between the road and the path. A new ramp system will lead from the ADA access point on the trail to the southwest corner of the new patio. New retaining walls will be poured along the widened path where it passes below the museum patio.

“The popularity of the Clear Creek Trail has only increased since the pandemic began. By partnering with the museum on this project, we can alleviate some of the trail congestion, enhance accessibility, and improve public gathering in one fell swoop,” said Chad Meinert, Parks Manager for the City of Golden.

In order to prepare for the construction, a few landscaping adjustments are necessary. First, two diseased and distressed cottonwoods at the museum will be removed. The City forester has already identified these two trees for removal within the next year, but to better accommodate the construction at the site, the removal will be moved ahead to October 20, 2020. Additionally, the historic mill stone that sits next to the tree will be temporarily removed to protect the artifact. It will return to the site after construction is completed.

Also impacted by the construction is the Presidents’ Rose Garden that sits between the museum patio and the creek trail. The Presidents’ Rose Garden was first established by the Golden Garden Club in 1961 in front of City Hall. The garden was moved to a different location on the Municipal Center greenway several years later until it was relocated to its present site sometime likely in the 1990s. The rose garden was cared for by volunteers from the Golden Garden Club until 2010 when it merged with the Table Mountain Garden Club. Those members cared for the garden until 2020 when, due to declining volunteer participation, the care of the gardens was assumed by the Parks Department.

“The Presidents’ Garden is a community treasure and has grown considerably over the years. But the steep terrain, aging irrigation system, and location at a narrow, busy spot along the trail has made it increasingly difficult to maintain,” said Richie.

The museum will give the garden a new, expanded home across the creek at the Golden History Park. The Parks Department will remove the roses this winter, house them temporarily over the winter at the Golden Cemetery, and replant them in the new location in spring 2021. The future garden plot will have new irrigation, enhanced soil, plant identification signs, and perimeter fencing in a larger, sunnier location. New signage that honors the Golden Garden Club members will be installed.

“Roses were a beloved symbol of refinement and civilization to pioneers who came west. Many brought cuttings of cherished rose bushes from their homes in the east to plant in the west. Having the Presidents’ Rose Garden as a part of the Golden History Park will allow us to tell new stories about the region’s agricultural and botanic heritage,” said Richie.

More information about the Presidents’ Rose Garden and the Golden Garden Club can be found on the Museum’s blog.