Object Lessons with John J. Herold and his Casserole (a recap and more resources)

Home » Collections and Exhibits » Object Lessons with John J. Herold and his Casserole (a recap and more resources) 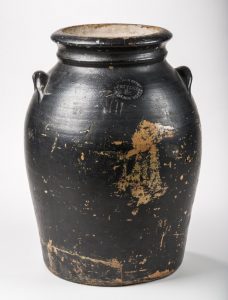 This crock made by the Golden City Pottery is one of our oldest examples of Golden-made wares from from the permanent collection. It dates to about 1867.

Golden already had a history of clay mining and had witnessed several potteries and brick makers come and go by the time John J. Herold showed up in 1908.

The clay deposits of the eastern slope of the mountains for many miles on either side of Golden have long attracted the attention of scientists and have been the subject of much study…Fine pottery has been made with the material from the Golden clay pits for several years…The celebrated Castle Rock at Golden and other rock-capped mesas west of Denver are composed of volcanic rock of no great depth. Below this volcanic covering is deposited the valuable clay in unlimited quantities.
–The Denver Times, February 10, 1915 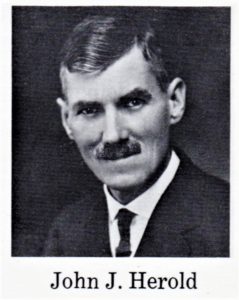 Born in Austria in 1871, he attended art school locally and then trained and worked as a glass and china decorator at a large pottery in Bonn, Germany. Herold emigrated to the U.S., working on the East Coast until finally settling in Zanesville, Ohio, where he became the manager of Owens Pottery Company and then superintendent at Roseville Pottery.

At Roseville, Herold created the Rozane Mongol deep red glaze pottery, reviving an ancient Chinese tradition. The stunning glaze would win an award at the Saint Louis World’s Fair in 1904.

Suffering from chronic respiratory distress (possibly tuberculosis), doctors recommended a drier climate. And so Herold came west. The master potter from Ohio arrived in Colorado in about 1908, when he started asking businessmen to back him in a new studio. In Golden he found a location in the abandoned Colorado Glass Works, the dormant bottle plant owned by Adolph Coors. Coors offered Herold the property at no cost, which was located at roughly 600 Ninth Street. Herold was up and running in 1910 with his Herold China and Pottery Company. Incorporators and officers were: John H. Linder, president; John W. Arasmith, secretary; Harry M. Rubey, treasurer; and John J. Herold, general manager. 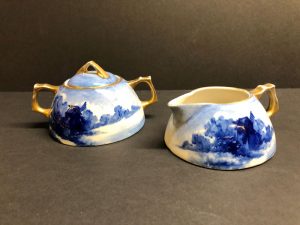 Gem of the Rockies sugar and creamer set made by Herold China & Pottery Company in Golden, Colorado.

Herold started out making art pottery and fireproof china. However, by 1914 the company was making chemical porcelain for scientific laboratories–and they still do. Colorado School of Mines Professor Herman Fleck tested the fireproof china and found that the porcelain was suitable for industrial applications. This quickly led to the development of a new market and within a couple years it was considered the best available by many a chemist.

In 1912 Herold was in financial trouble, and in March recapitalized with $7,950. Adolph Coors invested, purchasing 38 percent of the stock, making him the largest stockholder. He also joined the board of directors and by year’s end became the majority stockholder and president.

Herold turned over his interests to the investors in the recapitalized company and left Golden to work at the Western Pottery Company in Denver. Even though Herold returned to Golden for a short time, a falling out had occurred, and by 1915 he returned to Ohio for good and any of his remaining stock was sold.

Even though Herold was long gone, the company continued operating under this name through WWI. The business name changed to Coors Porcelain in 1920, and Adolph Coors Jr. took over as general manager.

Herold died relatively soon after in 1923. His obituary in the trade journal, Clay Worker, called him “without a doubt one of the greatest practical potters of his day.” Notable contributions include the development of scientific and chemical porcelain ware and in the art world the creation of an ox blood glaze called Rozane Mongol. 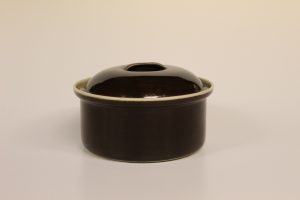 The company John J. Herold founded is today known as CoorsTek. This privately held company, led by the fifth generation of Coors family members, has operations all over the world. Here’s a great video introduction. You’d never know it, but their component parts can be found in many high-tech everyday objects.