One of the greatest cows in the world 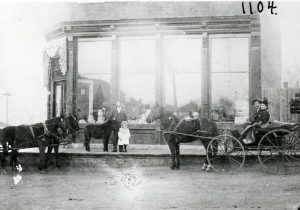 That’s Caleb Parfet and his wife in the buggy parked in front of thier store on Washington Avenue.

Best remembered today for clay mining, the Parfet family from Golden, also excelled in dairy farming. Caleb Ellsworth Parfet came to Colorado with his family in 1874. He went into the clay business with his brother, George (GW) Parfet. (Parfet Park’s namesake), and later ran a grocery at 922 Washington Avenue, selling fresh produce and food staples, as well as woodenware, baskets, lamps, and dinnerware.
In 1900, Caleb sold the store and purchased a ranch a few miles east of Golden to breed fancy Jersey cattle and grow fruit trees—a passion he’d pursue for the rest of his life. In the world of dairy, Caleb is remembered for developing the celebrated Financial Countess (yes they gave cows names), viewed by many as the greatest butter and milk producer of her time. Purchased for $750 at a Missouri farm sale in 1906, Parfet later sold her for more than $5,000.

The following comes from 50 Championship Cows of the Dairy Breeds, 1918:

It has often been said of Financial Countess that she lived before her day and therefore did not have the opportunity of demonstrating the true greatness, which she really possessed. However, her record of 935 pounds 10 ounces of butter in a year made her the champion producing cow of the Jersey breed.
Not only was Financial Countess a large producer of milk and butterfat; she was a very remarkable individual and is yet to this day referred to by Jersey breeders as a most excellent type of cow to perpetuate. Her individuality would do justice to any cow of any breed. She exemplified as fully as any cow that ever lived the fact that powers of production and the ability to reproduce these qualifications are compatible. It is possible to have them all present in one cow and when they are centralized, a great cow is the result.

Caleb died of pneumonia on October 27, 1915, at age 52. His obituary would record, “… he was known all over the West as a progressive farmer, orchardist and breeder of fancy Jersey cattle. I’m not sure what became of Financial Countess.

Caleb’s neighbor was Mr. Truelson, the onion king of Colorado, but that’s Golden culinary history for another issue. Send me your dairy-inspired stories.