Organized Labor at the Coors Brewery

Labor strife at the Coors Brewery reached its pinnacle in 1977, the year that brought an end to 100 years of organized labor at the brewery. Conflicts between workers and owners over wages and working conditions are nothing new, but the story of Coors’ labor practices and union-busting is largely forgotten outside of labor and academic circles—and those who lived it. Golden History Museum & Park is shining a light on this complicated history and laying the groundwork for future research on this lesser-known side of one of Golden’s most famous employers.

Several dates stand out, including this one:

April 7, 1977 – History repeated itself when 1,472 members of Coors Brewery Workers Local 366 struck over working conditions, seniority, salary, and the demand to end polygraph tests—a practice the company had initiated after the 1957 strike. The union vote to strike was not unanimous, and within the first month 950 of those who walked out returned to their jobs. The company replaced the holdouts via in-company transfers and non-union replacements. Without unanimous support, the strike lost momentum, and, in December 1978, brewery workers voted to decertify the union altogether. Local 366 had no choice but to dissolve. 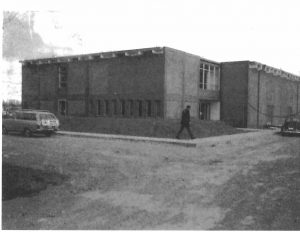 Golden resident and Coors retiree Larry Weaver recently shared the following memories from his experience of the 1977 brewery strike.

“I went to work the night the strike was called. I sent a registered letter of resignation to the Union Local 366. Our home was in close proximity to the union hall. I was fearful that our family might be targeted. Once an employee resigned from the union, their names were placed on a chalk board for all to see. We had to take our phones off the hook due to union members calling to harass us at all hours of the day and night.  It was the only time that I had a loaded shot gun in the house. Due to the fact that I had to work night shifts, I taught Betty how to shoot it.

The first seven days were spent emptying out germination beds and kilns. We cleaned the brewery up and shut down all brewing and malting. We checked the building for any sabotage that may have occurred by the strikers prior to the walk out.

There was security (Pinkerton) all around the perimeter of the brewery. Locks were placed on all the doors and the gates to the brewery were closed. Management placed security guards on to up South Table Mountain. Using binoculars, they watched the grain silos for any sabotage activity.

Trains delivered empty cars to be filled with beer twice a day. BNSF employees were union and would not cross the picket line. They would line the cars up outside of the gate and Coors train crew had to cut the cars out and put them where they needed to go.

I personally knew of friends and families that were broken up due to the strike. Sometimes it was even brother vs. brother. I lost several friends who did not return to the brewery after the strike was over.”

Larry’s account will be added to the permanent museum archive to help tell the story of organized labor at the Coors Brewery. Join the conversation with me and leave your comments below.