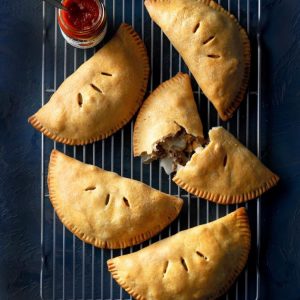 The pasty is a traditional hand pie. The origins of the pasty have been traced at least as far back as medieval England. But, it was in the mining districts of Cornwall in western Britain that the pasty became a culinary tradition. Pasties were prized for many reasons. They were an excellent way to repurpose leftovers into a new meal and their hand-held casing made them the perfect portable lunch for a miner deep below the earth. Cornish immigrants introduced pasties to Colorado during the mining rushes of the late 19th century. In 2011, Cornish Pasties were granted Protected Geographic Indication (PGI) in the European Union. Strict guidelines state that authentic pasties should be made of beef, include swede (aka rutabaga), and ingredients should be uncooked at the time of preparation. But, hey, this is America and we dispense with rigid traditions. So, here’s a recipe I’m making with leftover Easter ham.

1. Add flour and salt to a bowl and combine.

2. Cut in shortening and mix until it resembled bread crumbs.

3. Slowly incorporate water while mixing till the dough forms a ball.

4. Knead briefly and refrigerate for an hour.

6. Combine the filling ingredients into a bowl.

7. Divide the dough into 6 equal pieces.

9. Roll out dough, one piece at a time, into a thin disc. Traditional Cornish pasties must be D-shaped.

10. On one half of the dough, add approximately ½ cup of filling.

11. Close each pasty by folding the dough over and pinching it closed. (Watch video at around 42 minutes for tips on technique.)