Amazing photograph of the Woods and Rubey Bank

Take a look at this amazing cabinet card photo of the Woods & Rubey Bank of Golden, c. 1900. I acquired this rare photograph for the collection recently, and while it still warrants more research, I have a little background to share—hope you like it as much as I do! 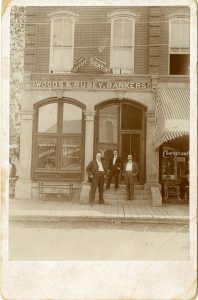 Woods & Rubey was incorporated in Golden in 1893 and by 1894 was advertising banking services of all kinds. The principle investor was Dr. William S. Woods, President of the National Bank of Commerce out of Kansas City, Missouri. Dr. Woods partnered with his 25-year-old nephew, Jesse Rubey, for day-to-day operations of his Golden enterprise. Notice the writing on the front window of the bank which states, “Responsibility One Million Dollars.”

The big guy on the left is Clarence P. Hoyt. Hoyt is best remembered as one of Golden’s early lawmen who served as city marshal, Jefferson County Undersheriff, and even excelled for two terms as warden of the Colorado State Penitentiary in Canon City, Colorado.

The same building continued to house a bank (First National Bank in Golden) until about 1960, when the bank moved into new quarters on Jackson Street. This building still stands on the corner of Washington Avenue and 12th Street. Most recently the building was home to Chelsea’s of London, and is currently home to Golden Goods.

If you want to learn more about new additions to the collection, watch for the December 2016 Golden Informer. A special two-page feature highlights ten more favorites for the year.