Prototyping a New Visitor Experience at the Astor House

A few weeks ago, staff members representing 15 different museums from across the region gathered at the Astor House for a special workshop presented by Denver-Area Evaluation Network (DEN). Led by internationally noted exhibit designer Kathleen McLean of Independent Exhibitions, the workshop focused on ways museums can create exhibits that better connect visitors with stories, places and objects using a variety of participatory techniques. McLean greatly emphasized the value of prototyping as a means of quick and affordable idea generation and for gathering immediate visitor feedback.

The Astor House served not only as a fun backdrop for the meeting, but as a source of inspiration for workshop attendees who worked together in teams to create prototype exhibits all around the building. No holds were barred as objects were moved, entrances relocated, and presently out-of-bounds spaces like the attic and apartment were opened up for use. The teams had 90 minutes to create their prototype before the building was opened to museum visitors who then viewed, interacted, and critiqued the work. The designers then used that immediate feedback to make improvements to their designs. And because they were all constructed with paper, cardboard, tape and marker, changes were easy and cheap. 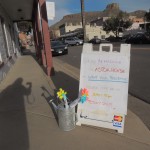 The entrance for the prototyping event was moving to a seldom used side door of the museum that opened directly into the parlor. 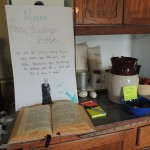 The Modern Homesteading Institute was a programmatic element dreamed up by one team that teaches historic skills and lifeways and appeals to the new DIY tends. 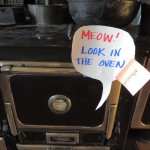 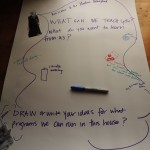 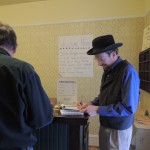 Erik Mason from the Longmont Museum and Cultural Center greeted visitors and handed out keys that unlocked biographies of individuals who stayed at the Astor House. 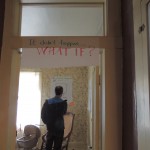 A visitor considers alternate historical outcomes that could have occurred had Golden retained the title of State Capital. 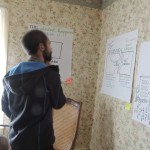 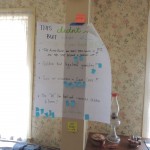 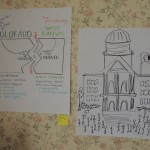 This scenario explore the intense rivalry between Golden and Denver. Could two separate states have been created? 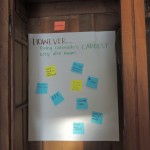 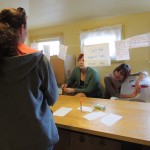 Jamie Wilms of the Molly Brown Museum and Carla Ahrenholtz of the Colorado Railroad Museum gather visitor feedback about their recreated Colorado School of Mines students’ room in the Astor House attic.

The prototype exhibits were varied and highly creative. In one room, a team created an exhibit that explored several alternative outcomes if history had been different and Golden had stayed the state capital. Another group interpreted the attic as a shared room for Mines students in the 1920s. A third team created question panels around the spaces that asked visitors to ponder whether an item such as a coal burning stove or a hutch filled with books were “necessities” or “luxuries.” A fourth team envisioned the kitchen as a programming space with functioning facilities. Groups even played with orientation and moved the main entrance to a side door that opens directly into the parlor.

At the end of the day, the teams and the visitors gave their feedback. The museum teams loved the opportunity to reinterpret the Astor House facility. Many commented how skeptical they were at first about the dynamism of the site, but by the end were overwhelmed by the many fun and meaningful ways they could connect with the Astor House. Visitors also by and large loved the experience and enjoyed the chance to see the facility in a whole new light. While not all of the prototypes were homeruns, they did provoke thought and reenergized the space.

My not-so-secret ulterior motive for hosting the workshop was to have all of these great museum minds thinking about possible futures for the Astor House. In the coming months, GHM will be working to re-imagine the visitor experience at the Astor House Museum. Kathleen McLean stayed for a second day and conducted a brainstorming “charette” with GHM staff. We borrowed from some of the ideas generated at the workshop and came up with some entirely new ones as well. We’ll be testing and prototyping all along the way and seeking your input. Stay tuned to this blog and follow the progress at the Astor House.