Ever find something that you forgot you had? I know I have. But it may come as a surprise that it happens in museums too—even the most respected institutions. In fact, it happens so often that there’s a professionally agreed upon procedure for dealing with items that are literally, “found in collection.” 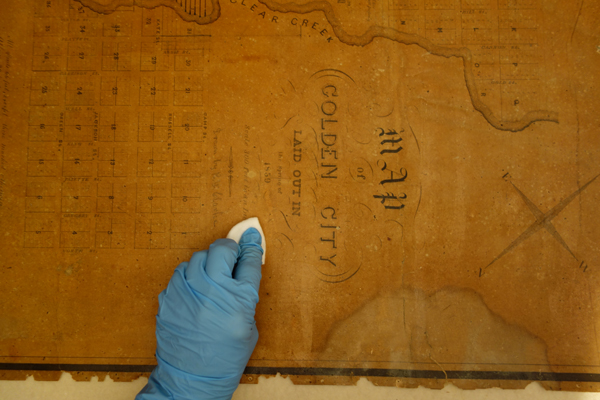 Last summer, while working in off-site storage I literally uncovered an 1859 Golden City map wrapped in tissue paper. It was in fair condition, mounted to cardboard with a newspaper backing. It showed evidence of water damage, the upper left corner was missing and the entire perimeter was covered with nail holes. There was no documentation or record on file, so I spent some time looking for clues, researching its background, and confirming the map’s authenticity.

Colorado Gold Rush era maps are rare and it turns out we have the real deal. This is easily the earliest known map of Golden in existence (surpassing Berthoud’s 1864 map of Golden by five years). This priceless map predates the establishment of the Colorado Territory, Jefferson County and Golden City governments. Best of all, it showcases elements from a past landscape, a vision for the future and the entrepreneurial spirit of town-building.

A few highlights to note: 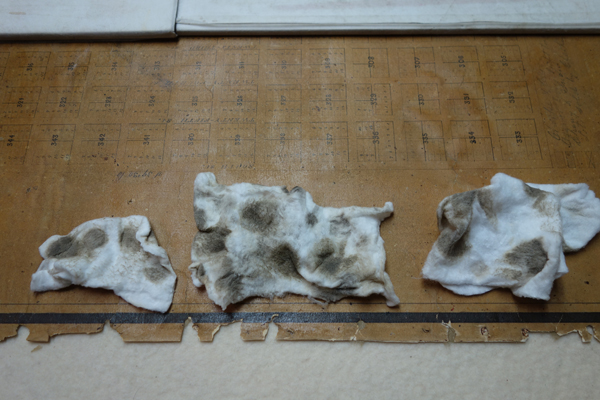 Historically and monetarily the map is priceless, so late last year it was earmarked for a conservation evaluation. With support from the Greenwood Fund, we asked paper conservator Karen Jones to examine the map early this year. A conservation treatment plan to remove the matte board backing, clean the surface and re-house the map in a protective enclosure started in May. A high-resolution digital version of the map is viewable thanks to a cooperative arrangement with the Denver Public LIbrary.

It’s exciting to make such a find, and the excitement continues as we reveal and document more pieces from Golden’s ever-changing landscape.

If you’d like to support other conservation efforts please let us know.