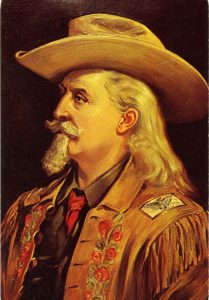 Detail of postcard from an oil painting of William “Buffalo Bill” Cody by Arthur Goodman.

William Frederick “Buffalo Bill” Cody died on January 10, 1917, from natural causes, surrounded by family at his sister’s house, in Denver, Colorado. A grand state funeral followed on January 15, where his body lay in state in the rotunda of the State Capitol from about nine a.m. until noon. Cody’s body then traveled through the streets of Denver to the Denver Elks Lodge No. 17 for the funeral. After the funeral, his remains went to George Olinger’s Denver mortuary, where they remained in a vault for nearly five months while the gravesite was prepared.

On June 3, 1917, Buffalo Bill’s remains were carried to the summit of Lookout Mountain in Golden.  Mourners and the curious arrived on special trains that ran from Denver to Golden. A steady stream of cars clogged the roadways into Golden and special buses shuttled people up the recently completed Lariat Trail—perhaps Colorado’s first traffic jam. The Lookout Mountain Park Funicular saw its busiest day ever. 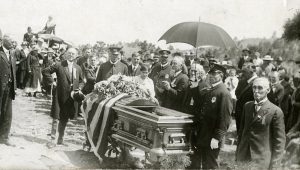 At three in the afternoon Buffalo Bill was laid to rest in a full Masonic burial service, under the auspices of Golden City Lodge Number 1. The front page of the Colorado Transcript reported:

With solemn and impressive Masonic burial rights, the Golden lodge of Masons, in the presence of 15,000 people conferred the last honors over the remains of Buffalo Bill.

The casket of solid metal was lowered into a grave blasted from the eternal granite. The site was one that the old scout himself would have selected, on the lofty eminence commanding the mountains and plains he loved so well.

A poem dedicated to the sleeping scout was read by Jay J. Bryan of Golden. A farewell service followed, which was conducted by the entire body of Masons.

In Memory of William F. Cody

Where the rosy morning sun

Will cast his early beams,

Where no unquiet dreams

In this, thy sovereign West. 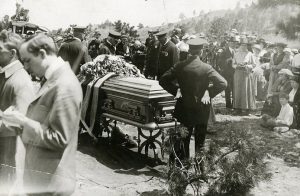 Old Scout, thy race is run,

Thy life work so well done,

Though all thy fitful years

Has swelled a nation’s tears;

Lo, at thy grave we now

The stars and stripes, our flag,

That floats from yonder crag,

Gives honor to thy tomb.

And we, who yet remain,

In witness of thy fame,

Must bow our heads in grief,

And mourn our silent chief,

Whose name with Indian band

Is known in every land,

Honored in every clime

Through endless years of time.

And ye, who from afar

Pause when you see the name

For great was he who lies

Beneath the unclouded skies,

And this the fitting spot

Where rocks and hills abound,

The requiem o’er his bier;

And thus we leave him here,

Just on the western rim

Of plains conquered by him.

Where the rosy morning sun,

Will cast his early beams

Where no unquiet dreams

On this, thy sovereign West 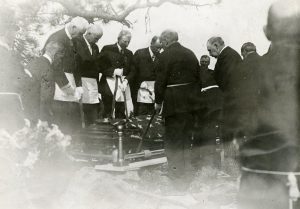 As the last shovelful of earth filled the grave, a bugler sounded taps. When the final note died out, the ceremony closed with an 11-gun salute by members of Battery B, Colorado National Guard.

Today, the legend of Buffalo Bill continues to live on, and the grave site is one of Colorado’s most popular tourist attractions. Having seen the world, Cody wanted to end up in Golden, much to the dismay of Cody, Wyoming—the town named after him.  If you have never paid your respects, now is the time.

Find this Epic Event and dozens more in the Epic Events Timeline at GoldenHistory.org.

This article originally appeared in the June 2017 Golden Informer.