Golden history never gets dull or boring. Longtime Golden resident Rex Rideout recently shared the following research from Linda Graf. Apparently, Graf intended to write a book on Golden’s legendary movie star, Rex the Wonder Horse, but for unknown reasons it never happened. As an aside, Rex Rideout is named for the famous acting horse; Rex’s parents were big fans.

Rex was a beautiful pedigreed Morgan with a vile temperament totally foreign to that breed (I feel that temperament was a gene pool that gave him a heavy dose of sensitivity & intelligence and to much, much abuse).  His story is such a rich one; it touches on so many aspects of American history.  He was bred by the man who created “the western cowhorse” through his Morgan breeding program in Texas; Sellman’s horses went to ranchers all over the west & eventually, the world…(Sellman’s brother had carved out a primitive ranch along the San Saba River  there in the 1880’s and was murdered by those who opposed fencing the range; Richard, his brother kept the ranch going by breeding desperately needed cowhorses and turned it into a million dollar operation). 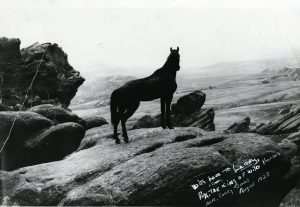 Press photo for the movie-star horse, Rex, also known as the wonder horse and king of the wild horses. This photo was taken at Red Rocks near Chick Morrison’s ranch.

Rex was sired by a registered Morgan named Headlight, the stallion that was called “The King of the Morgans,” because he conformed so closely to the original type.  Rex was born in 1915 and named “Casey Jones.”  There is evidence that he was abused by cowboys on the Sellman Ranch who tried to “break” him before he was sold in 1917.

After a Colorado rancher bought him, he ran wild on the plains of eastern Colorado (I don’t think it was too far from Golden), and may well have suffered abuse again in the violent sort of roundup that occurred to get him back.  He killed one of the wranglers and the rancher ordered him shot, but a reform school in Golden (Colorado State Industrial School) took him to breed.  They couldn’t “break” him either, so they chained him in a stall for two years and boys abused him there.  From all that he suffered he collected a wide range of odd and very violent behaviors.

Chick (Charles Pacific) Morrison, a movie producer’s talent scout, a real cowboy from Morrison, CO, whose grandfather founded the town), and a terrific horseman, discovered Rex at the reform school, bought him for $400, and took him to train (in 2 weeks or so) on his dad’s ranch; most of the first movie “King of the Wild Horses” (1924) was shot at Morrison’s red rocks.  Chick refused to use any whip or stick; he always said his method was “Kindness.”  Rex broke several bones in Chick’s body and the man was on crutches when the filming started, but he never used any other aids to train Rex other than sugar and carrots.  Very sadly, another rogue horse named “Steamboat” accidentally fell when Chick was training him for the second Rex movie and crushed Chick to death (June 1924)…I really believe if Chick had lived, Rex would have been healed of many of his violent behaviors.

The studio that now owned Rex was a wonderful one:  Hal Roach and the cameramen/director Fred and Floyd Jackman) were SO talented.  George Stevens was just starting out as a cameraman…19 years old and brilliant…he helped film all the Roach Rex movies (four of them) and honed his own methodology as a future director.  All of Roach’s Rex movies were hailed by critics and the public.  They were the very first pictures to ever star a horse alone, without a cowboy “pal.”

The economic crash was coming and so was the sound revolution by 1927, so Roach had to sell Rex to Universal.  The head of that huge company had wanted to steal Rex for years because the horse made so much money.  The Universal films were shot by terrific cameramen, like Roach’s, but the stories were so bad that by the last one (1929), critics told Rex to “hang up his spurs and retire.”   These pictures all starred Rex and silent film cowboy Jack Perrin and his pretty white horse, Starlight.

Rex made one last film for Universal starring Ken Maynard (who actually abused horses badly, even his own beautiful costar, “Tarzan”).  Universal offered to sell Rex to Maynard for $1200, but thankfully he didn’t take the offer.   By then even Universal was going under, too, so Rex was sold to Fox, where there were directors really into the new sound technology who wanted to revive the western genre.  They started to shoot a film in Flagstaff, AZ with a new discovery, John Wayne, to support Rex, but the director was called back to Hollywood (I really think it was because of Wayne…Fox had bigger plans for him) and this picture was never finished.   The Flagstaff man who helped all the movie companies since the early 20’s find locations in northern AZ, Lee Doyle (his dad had pioneered Flagstaff and was Zane Grey’s guide), bought Rex.  Amy, Lee Doyle’s wife, was the first to ever teach John Wayne how to ride a horse.

And that’s where I am right now…up to 1931. Your dad must have been a little boy in the next decade, when Lee Doyle (there was another owner, briefly, Tom Mix’s good friend Sid Jordan, a fantastic stuntman and animal handler) freelanced Rex to the studios producing the serials:  “Vanishing Legion,”  “The Adventures of Rex and Rinty,”  “Law of the Wild,” and “Robinson Crusoe of Clipper Island.’    During the 1930’s too, Rex starred in the very first of three film adaptations of Will James’ “Smoky’ and Will James was the narrator! You may have read that book when you were a boy?   (Sadly, this film is lost).  Rex made several other features, too, but the serials were the kids’ favorites.  He may have been sold to someone in Kanab, Utah, before he died around 1940.  Until then he lived most of the time on Lee Doyle’s ranch outside of Flagstaff on the road to Sedona. The date and place of Rex’s death is unknown to me at this point, but I’m working on it.

See a reproduction Rex movie poster in The Salon sometime soon, or discover more artifacts in in the online collections.