Rounding out the collection one photo at a time

It is not about quantity, but rather quality, when it comes to museum collections. At the Golden History Museum & Park, we’re constantly refining and improving. We added some stellar items this year, including a Coors Malted Milk pharmacy jar and the two original Golden cemetery burial registers and map. However, I thought I’d focus on some new “old” photos. Our photo collection is a strength of the Museum, and our images make up the finest collection anywhere. A few of my current favorites include:

Jodi Hayner allowed us to copy her original, which once belonged to her grandfather. See a copy in the Milking an Opportunity display at the museum. 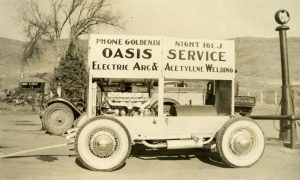 Our front desk volunteer Larry Thuet surprised us with several amazing photographs of his dad’s service station. The Oasis Service Station, once located at 24th and East Streets, was the first in town. Thuet and crew also fabricated customized portable arc welders and “hay bucks” documented through photos.

Irene Baena from Wisconsin donated a packet of photos that included two negatives of Washington Ave. taken soon after the town’s first downtown streetscape was completed. The photos arrived intact in their Kodak processing envelope from Fred Robison’s Golden bookstore. Another favorite is a snapshot of Mr. Beamer driving his horse-drawn door-to-door vegetable wagon. 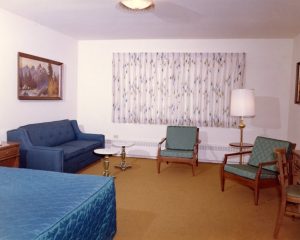 Interior of a Holland House guest room, about 1965

Greg Holland has continued to uncover great shots of this venerable institution founded by his grandparents. We enlarged one of the Coffee Shop for the new Touch Gallery (come see for yourself). The set includes several more showcasing the lounge, dining room and a seldom-seen hotel-room view.

Rare images from the Deeken family in Wisconsin provide a visual record of the 1908 concession stand, lighthouse, and dance hall, none of which exist any longer.

Created and owned by Mines student Ruby Tanton Allan of Oklahoma, this gem is filled with photos of student life at the Beta Theta Pi fraternity, tug-o-wars over Clear Creek, painting the “M,” Senior Day, and Homecoming.

Easley and Linder family photos, about 1900

Lisa Goodfellow shared her family photos, which included a family gathering for Christmas dinner and a rare view of the Geijsbeek Pottery Company.

Bill Harmsen outside his Jolly Rancher Store in 1949

Grandson John Harmsen brought this one in along with other Jolly Rancher memorabilia from Golden, including the original design for their dynamic neon sign. 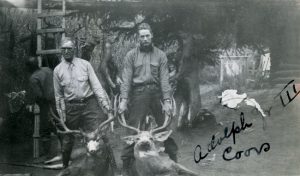 Ed Maas brought in his Uncle Maurice Jones’ scrapbook recording the annual company-sponsored hunting parties. We selected nine of the best to copy, including one of Adolph III with a trophy deer.

After images are cataloged as part of the photo collection, they are viewable online. Reprints of many of our photos are available for purchase. 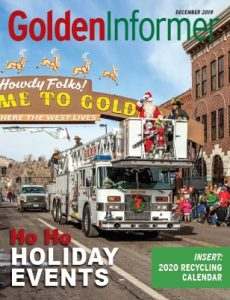 This article also appeared in the December 2019 issue of the Golden Informer.