Greg Holland shared this memory about a Golden snowstorm and how his grandparents, Lu and Ethel Holland, who owned the Holland House, helped dozens of stranded travelers. 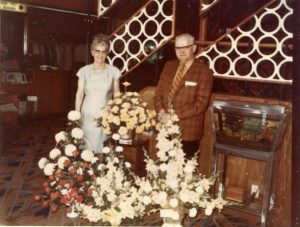 Lu and Ethel Holland on their 50th anniversary, 1968, inside the Holland House.

Long ago, some time in the 1960s, an unusually large snowstorm stranded many people in Golden. At the Holland House all the available hotel rooms filled up quickly, yet the cold, weary people kept coming in looking for something warm to drink, food to eat, and hopefully a place to stay. But there was no more room at the Inn. The staff, at least 50 of them were stuck too. The roads were completely impassable. No one could make it home. If they weren’t parked already, the people were leaving their cars where they had become stuck on the roads and were trudging through the snow to our place.

Rather than turn anyone away my grandfather told our people to give them whatever they wanted to drink on the house and only charge them for the food they ordered. He made sure everything kept running like a clock as huge quantities of food and drink flowed out of the kitchen and the dirty dishes came back in. Soon all the seats in the lobby, the coffee shop, the lounge and the dining room were filled and there was standing room only. So he opened the banquet rooms so that people might have a place to sit and soon even they were all filled too. Even the floor of the hallway going back to the dining rooms was full of people sitting down, shaking off the cold. Some were exhausted and had already fallen asleep. 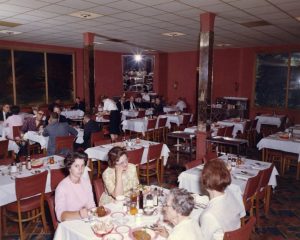 My grandparents chose not to turn anyone away, they just made room. It was getting late now and the rest of the weary people were starting to lay down on the floor, trying to cover themselves with their coats. Some used their shoes for pillows. So my grandmother had the staff break out all the spare bedding and hand it out to the people. One blanket per couple to keep warm and then sheets when the blankets ran out until there were no more left. She walked around with the staff handing out blankets, pouring hot coffee and laughing, joking and encouraging everyone. Her laugh was one of those truly infectious, feel good, happy laughs that you could always hear from the other side of the Hotel. When I was little all I had to do to tell where she was was to listen for her laugh. Like it says in proverbs, “a merry heart does good like medicine.” Her encouragement worked like medicine and pretty soon she had the whole place calmed down and the folks were looking forward to enduring this temporary hardship with a good attitude and then moving on once the storm broke.

Mr. Vigil and his wife, the owners of the restaurant, “Basque Village,” in Lakewood, CO, were among those who were stuck here in this predicament and like most everyone else truly appreciated the hospitality and left never forgetting how well they had all been treated. This was his version of the story. My grandparents singlehandedly inspired a small army of people to go out and bless others when hardship falls upon them.

Mr. Vigil never forgot, and when he found out who I was he went out of his way to bless me and include me in special events he created with the important and famous people he knew. How interesting, my grandparents’ act of blessing people was returned not to them, but to me. I got to benefit today, from their kindness to others years ago. That’s a lesson I treasure and will never forget.

If you have a Golden memory or story we should consider publishing, send it my way. Learn more about Golden’s legendary Holland House in the Golden History Museum Touch Gallery.