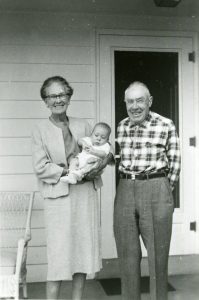 The Goetzes outside their home on 11th Street in Golden.

Ida Evans donated a collection of scrapbooks to the museum in 1975, which once belonged to her sister Irene (Gay) Goetze. Several of the best books have been missing from the collection for over 30 years. Thought to have been taken by a onetime museum board member, two of the books were known to contain irreplaceable Golden history and original photographs. Sporadically, photos from the books have turned up from other donations since 2012, providing a glimmer of hope that perhaps they still existed.

Irene Gay was born in 1894 east of Golden in the Fairmount community. She, her three sisters, and one brother went to local schools. Her dad, William, worked at the Golden Fire Brick Company. Irene married local boy Oscar Goetze in 1915, and together they would spend most of their lives in Golden. Both worked at the Colorado Transcript for many years and gave back to the community in many ways.

For years Irene ran the Boston House at 822 12th Street in Golden (aka Astor House), renting out rooms to students attending the Colorado School of Mines. Additionally, she dedicated over 30 years of her life to the Jefferson County Chapter of the American Red Cross, which honored her with the Dark Blue Veil award for her service to others. Irene and Oscar retired and sold the Boston House in about 1946 so they could travel.

A self-styled historian, Irene documented a number of Golden buildings before demolition and cataloged them in scrapbooks. By her own admission, she filled her books with notes taken from old newspaper files that she verified with visits to local museums. Her scrapbooks date from 1965 and 1967 respectively. 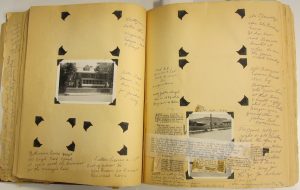 Although the scrapbooks came back in rough condition missing some photographs, all was not lost. The photographs on the right show the old Christian Church on the north side of Clear Creek near what is today the American Mountaineering Center.

In 2019 a longtime Golden resident Madeleine (Vacher) Lenz brought two scrapbooks to the museum which she recently purchased from local auction house. The minute I saw them I knew what they were. When asked, Madeleine said, I work at Corbett’s Auction House and discovered two scrapbooks about Golden history. I purchased them at the auction because I’m a Golden native. They came in a large box with several other scrapbooks from families that had nothing to do with Golden so I didn’t want them.

I am overjoyed Madeleine chose to bring the scrapbooks to the museum and agreed to donate them again to the museum. It’s disheartening they were ever taken in the first place. For now, they are safe again—back where they belong. Unfortunately, they are in rough condition with missing pages and photographs. Once they are re-cataloged, we’ll share some of the best items through our online collection. Peek at one here. 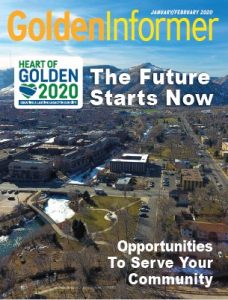 This article also appeared in the January/February 2020 issue of the Golden Informer.