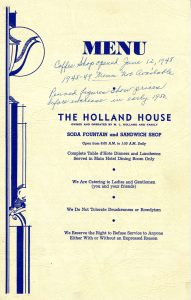 Anyhow, I’m still sorting through stuff, but was excited to find what may be the first Holland House Soda Fountain and Sandwich Shop menu from about 1948. I was not aware of their soda fountain, which offered the usual fare like malted milk for a quarter. If you wanted an egg with your malted you could expect to pay another ten cents. Other offerings included limeade, Coca-Cola, bananna splits, and parfaits.

Their list of pies caught my eye too. Five altogether, including apple, cherry, blueberry, lemon, and cocoanut cream. Hungry yet?

Holland House had a bar, and of course, sold Coors Banquet. Budweiser and Schlitz were available for a premium.

I especially like some of the statements on the cover such as, We do not tolerate drunkenness or rowdyism. It was a respectable joint. The same rule applies for visiting the musem too.

Got Holland Housue memories or artifacts to share? Let me know.